The Fed's Response to the Global Pandemic Led to Asset Bubbles, and a Bifricated Market and Economy. We Believe the Market is Poised to Mean Revert.

The vaccine rollout initiation and the passage of a $900 billion stimulus bill drove the S&P 500 to an all-time high in December. The S&P 500 rallied by 3.7% in December and finished 2020 higher by 18.4%. The Nasdaq Composite, powered by the mega-cap technology stocks (Apple, Amazon, Microsoft, Facebook, Google, and Telsa account for 45% of the index), finished the year up 44%, its best year since 2009.

The stock market's strong performance is hard to reconcile given the severe economic damage that the worst pandemic since the Spanish Flu of 1918 caused: four hundred thousand U.S. deaths, 17 million people out of work or underemployed, and 4 million small business closures. Despite a record 20% of Americans' income coming from the government in 2020, nearly 5.5% of U.S. homes are in forbearance, and 20% of all renters are behind in their rent.

In March, the S&P 500 crashed by 34.4% in 33 days (the fastest bear market in history) as the Coronavirus spread and the economy was shuttered. The Congress and the Fed responded to the crisis by providing a record level of fiscal and monetary stimulus. Congress passed the $2.2 trillion CARES Act, while the Federal Reserve cut interest rates to 0% and injected approximately $3 trillion of liquidity into the financial markets through its Quantitative Easing program (Q.E.). This massive liquidity injection, which continues today, helped drive the S&P 500 up more than 70% from its March crash low.

The pandemic and ensuing economic shutdown led to a bifurcated economy. While the economy's service sector was closed, mega-cap technology companies and businesses leveraged to the "stay at home" economy thrived. The stock market also became bifurcated, and much of the Fed's liquidity injection went into a handful of mega-cap technology stocks that drove the market indexes to all-time highs. In fact, Apple, Amazon, and Microsoft alone accounted for 50% of the S&P 500's performance in 2020.

The "stay at home" economy and the advent of Robinhood, and other investment firms with $0 commission rates, led to a surge in new retail investors. According to Citadel Securities, retail trading volume reached nearly 25% of total volume, versus only 10% a year ago. We believe that the Fed's liquidity coupled with euphoric investors drove many market segments to irrational levels not seen since the 2000's technology bubble. For example, 75 companies in the S&P 500 are currently valued at more than ten times revenue. During the peak of the 2000 technology bubble, only 44 companies reached this level of overvaluation.

We believe that NIO, Inc. is an example of this irrational exuberance. NIO, Inc. is a Chinese electronic vehicle maker, which is a favorite among "Robinhooders" and Reddit stock market chat groups. In 2020, NIO stock price rallied from roughly $4 to $60 today. Despite Ebitda cash flow of negative 239mm, NIO is valued at $91 billion, which is more than G.M. ($76.4 billion) and Ford ($48.4 billion). Last year, NIO, Inc., traded an average of 111 million shares each day, which was second only to Apple.

While sanguine new investors drove many stocks to irrational heights, corporate insiders are selling. According to Bloomberg, "in the first two weeks of the new year, a total of 1,000 insiders sold their stock and 128 bought shares, leaving the sell-to-buy ratio poised for the highest monthly reading in data going back to 1988, according to Washington Service" (see chart 1).

In our view, the S&P 500 is very expensive and offers a poor risk-reward. According to Factset, the forward 12-month P/E ratio is 22.5, which is 43.3% above the 10-year average of 15.7. Additionally, the Buffet Indicator, which is the ratio of total U.S. market value to GDP, has never been higher (see charts 2 and 3 below).

Chart 2: The Fed's Excess Liquidity and Speculation Drove Stock Valuations Away from the Fundamentals

Chart 3: The Value of the Stock Market Has Never Been Higher Relative to the Economy

According to Goldman Sachs, by most valuation measures, the stock market has never been more expensive (see table below).

While the stock market is very expensive and offers a poor long-term risk-reward, we believe the bifurcated economy and stock market provide substantial opportunities in 2021.

The mega-cap technology and the "stay at home" stocks prospered in 2020, but today their valuations are extreme, and difficult year-over-year comparisons will slow their growth rates. We believe that the market sectors that thrived during the shutdown are at risk as the vaccine is administered and the economy reopens this spring/summer.

While we expect growth stocks to struggle this year, we see good value and positive risk-rewards in the value sectors of the market (financials, consumer, and energy), which performed poorly in 2020, and are positively leveraged to an economic recovery. Additionally, after underperforming the S&P 500 for more than a decade, we believe that the International and Emerging Markets are poised to outperform while increasing diversification (Chart 4).

Chart 4: The MSCI EAFE and Emerging Markets have Underperformed since the Financial Crisis and are Poised to Mean Revert

The 5-year TIPS breakeven inflation rate (a market-based measure of future inflation) is 2.16%, which is the highest expected inflation rate since 2013 (see chart 5). If the bond market is correct and inflation accelerates due to the historic level of monetary and fiscal stimulus, growth stocks and bonds will perform poorly. In contrast, value and foreign stocks should perform well. Also, in this environment of accelerating inflation, we expect that commodities will outperform and provide economic balance to the portfolio.

Chart 5: The 5-year TIPS Breakeven Inflation Rate is at a 5-year High

The table below shows the disconnect between the market and the fundamentals -- i.e., stocks had a great year while the fundamentals were poor. For example, the Consumer Discretionary sector earnings fell by 31.1% in 2020, yet the stocks rallied by 29.7%. Also, the technology sector jumped by 43.8%, yet earnings were up only 5.6%. This massive increase in valuation will lead to significant underperformance in these sectors as the economy recovers and interest rates rise.

We continue to closely watch the financials since they play a critical role in funding growth, and their sustained outperformance typically leads to a robust economy. The financial sector had another month of strong relative performance -- the financials increased by 6.4% while the S&P 500 rose by 3.7% in December -- and have outperformed the S&P 500 since October. Since the financials typically start to outperform five months before an economic expansion begins, we are hopeful that the economic recovery begins this spring.

In December, we performed in line with our 60/40 benchmark while assuming less market risk. Our investments in the MSCI Emerging Markets, the GSCI Commodity Index, the S&P MidCap 400, MSCI Japan Index and Gold outperformed the market.

In 2020, we erred on the side of conservatism because we were in a deep recession, and there were so many uncertainties and unknowns.  In high-risk periods, we believe it is critical to play defense since capital preservation is the most important aspect of investing. On average, the stock market drops by 34% approximately every four years. If you lose 34%, you need a 51.5% return to get back to breakeven. The key to compounding at an above-average rate is avoiding such drawdowns.

In the short-term, investing is based on risk, reward, and probabilities, similar to gambling (except the gambling odds are against you). If the dealer has a six showing in blackjack, the odds are 42% that he will go bust. Even novice gamblers will not hit when the dealer has a six showing. In our view, the market offered a terrible risk-reward in 2020, especially after the S&P 500 rallied to an all-time high in August. Many investors ignored the risks and hoped the Fed's actions would continue to bail out the market. While this bet worked in 2020, we believe it was the wrong bet to make, and it was equivalent to getting lucky while hitting on the dealer's 6. In periods of high risk and uncertainty, one should always focus on preserving capital; unfortunately, the Fed taught many investors to ignore risk.

We continue to expect growth to surge next spring as the economy reopens and consumers spend their pent-up savings. We continue to opportunistically reposition the portfolio by gradually reducing our exposure to the market's defensive sectors and increase our investment in economically sensitive and value sectors. Additionally, we will continue to increase our investment in international and emerging markets, which are inexpensive and should benefit from a weak dollar

We expect the market will remain volatile as the virus surges this winter. We will gradually reposition our defensive portfolio to an economically sensitive portfolio that should outperform as the economy accelerates next year. 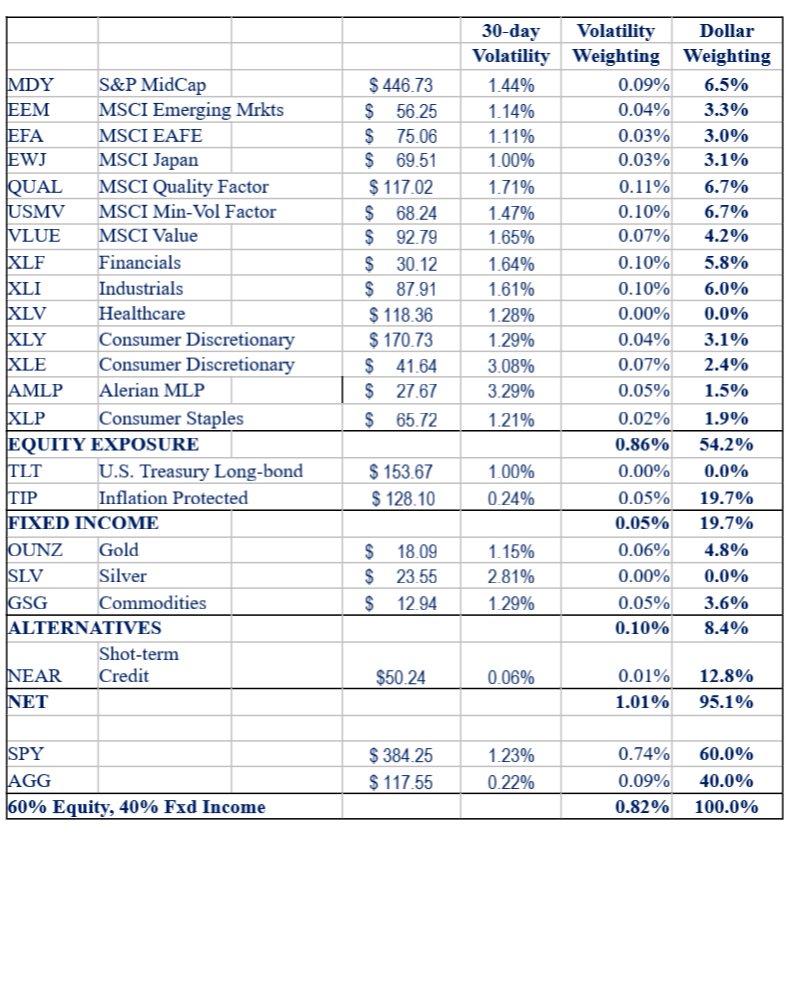 Since the late October vaccine low, the S&P 500 has rallied nearly 20%. Euphoric investors drove the market to all-time highs despite the surging and mutating virus, the economic lockdowns, and a divided country. We believe that the market offers a poor short-term risk-reward because it is very overbought, investors are euphoric, and signs of irrational speculation are occurring daily. We believe the market will remain volatile, allowing an excellent opportunity to gradually shift the portfolio from defensive to economically sensitive. We expect to increase our tactical risk exposure during periods of weakness when investors are fearful, the market is oversold, and breadth improves. Our short-term market outlook is neutral.

Since the late October vaccine low, the S&P 500 has rallied nearly 20%. Euphoric investors drove the market to all-time highs despite the surging and mutating virus, the economic lockdowns, and a divided country. We believe that the market offers a poor short-term risk-reward because it is very overbought, investors are euphoric, and signs of irrational speculation are occurring daily. We believe the market will remain volatile, allowing an excellent opportunity to gradually shift the portfolio from defensive to economically sensitive. We expect to increase our tactical risk exposure during periods of weakness when investors are fearful, the market is oversold, and breadth improves. Our short-term market outlook is neutral.