In late November, the Federal Reserve’s hawkish pivot and uncertainty about the spread of the Omicron variant led to a sharp market decline that continued into December. The S&P 500 fell by 0.7%, while the small-cap Russell 2000 dropped by 4.3% in November. The Foreign markets also performed poorly, the MSCI EAFE index of international stocks and the MSCI Emerging market index dropped by 4.5%, and 4.1%, respectively.

Economic uncertainty and the flatter yield curve led growth stocks to outperform value stocks by 4.2%. The Russell 1000 Growth rose 0.6%%, while the Russell 1000 Value index declined by 3.6% in November. Most sectors of the S&P 500 declined in November, except for technology, and consumer discretionary, which are dominated by the mega-cap growth stocks (Apple, Microsoft, Amazon, Tesla, and Nvidia). 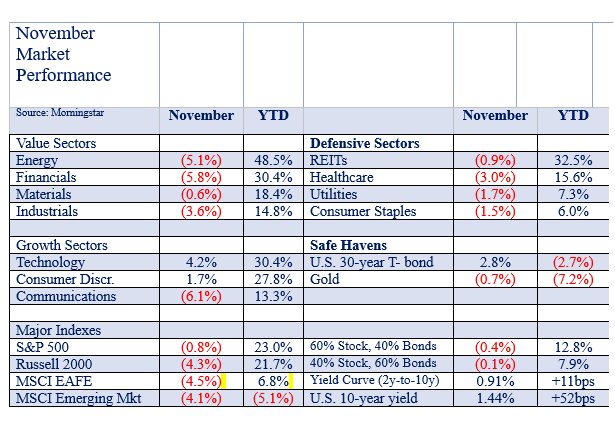 The economy remained strong in November. The ISM Manufacturing Index increased to a robust 61.1, while the unemployment rate fell to 4.2%, and the initial unemployment claims fell to the lowest level since November 1969. Unfortunately, inflation accelerated to 6.8% versus last year, which is the highest level since June of 1982.  After seven months of an inflation rate greater than 5%, the Federal Reserve finally admitted that inflation was stronger than they expected and may not be “transitory.”

Chart 1: Since March, the CPI inflation rate has been greater than the Fed’s 2% inflation target. Despite inflation at a multi-decade high, the Fed keeps short-term interest rates at 0% and continues to print billions of dollars each month to buy bonds. 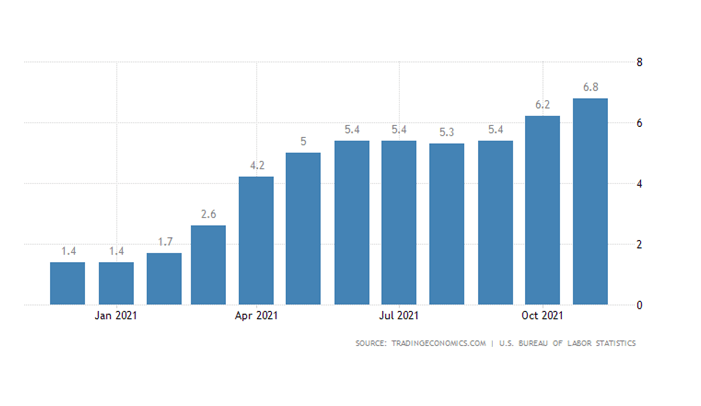 In early November, the Fed announced that it would taper their financial asset purchases by $15 billion each month until their Quantitative Easing program (QE) was completed this summer. In late November, Federal Reserve Chairman Powell told Congress that inflation is not "transitory," and they planned to accelerate their QE tapering process. Finally, at their December 15th meeting, the Fed announced that their QE bond-buying program would end in March, and they planned to increase interest rates three times during the remainder of 2022.

We have been critical of the Fed because they failed to understand that their profligate monetary policy (since March 2020, the Fed printed $4 trillion to buy bonds, which is equal to 17% of GDP) and the long-term underinvestment in housing, energy, and commodity markets would lead to an inflationary surge.  Today, inflation is at a multi-decade high, yet the Fed stated that they will continue Quantitative Easing for three more months and will keep short-term interest rates significantly below inflation for the foreseeable future.

Housing costs are approximately one-third of the CPI inflation rate. After more than a decade of underinvestment in housing construction, there is a significant supply shortage, inventories are low, and home prices and rents are booming. Despite the surging shelter costs, (the S&P/Case-Shiller Housing Index is up 19.5% over the past year), the Fed will buy an additional $60 billion of mortgage-backed securities over the next three months to keep mortgage rates artificially low and drive home prices higher.

Despite surging inflation, financial conditions are the most accommodative in history. In fact, real short-term interest rates (U.S. T-bills minus inflation) have not been this negative since 1980. Additionally, since monetary policy acts with a lag of more than 9 months, it’s difficult to see how the Fed’s gradual actions will lead to stable prices.

Chart 2: Real short-term interest rates are -6.8%. real rates have not been this negative since 1980. Inflation and negative real rates are a regressive tax on savings

We remain positioned for an economic environment of moderating growth and high inflation. Our core investments remain in the economically sensitive value sectors of the market (industrials, financials, and energy), commodities, TIP's (U.S. Treasury Inflation-Protected Securities), and floating-rate debt ETFs. We remain underweight equities and fixed income duration and overweight commodities relative to our benchmark.While we remain positioned for an inflationary economic environment we are concerned that the accelerating inflation could lead to a significant monetary mistake by the Fed, which could lead to a bear market or an economic recession.

Our portfolio's risk level (annualized volatility) is 12.0%, which is less than our 60/40 benchmark. 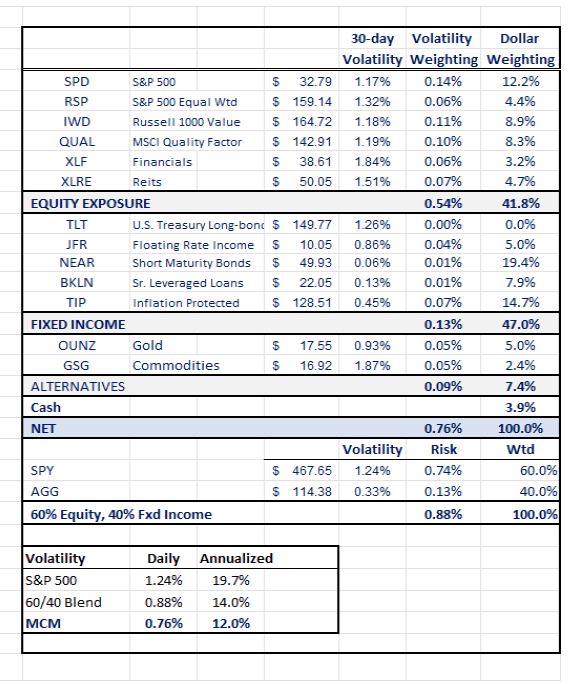 While most stocks have been in a correction for a while, the emergence of the Omicron variant and the Fed's indication that they would accelerate their taper were the catalyst for the recent market sell-off. While the S&P 500 had a mild 5% correction, the Russell 2000 dropped nearly 15%. The recent positive news about the Omicron variant, the market's liquidity (driven by QE, corporate buybacks, and margin debt), and favorable seasonality should drive the S&P 500 to a marginal new high in the new year. We will become more constructive and increase our tactical risk exposure if the market’s breadth improves.

We believe that the S&P 500 offers a poor risk-reward because it is extremely overvalued. Also, we are concerned about the long-term unintended consequence of the unprecedented monetary and fiscal policy that was used to combat the pandemic.  Artificially low-interest rates and historic peacetime deficits have led to a record debt burden, which will become problematic as the economy grows, and interest rates normalize. We continue to see a significant opportunity to invest in the value sectors of the market while avoiding the mega-cap tech stocks and the S&P 500. While we expect to profit from the reflationary rotation into the cyclical stocks, longer-term, we remain concerned about the impact rising interest rates will have on profitability and stock valuations. Our Strategic Asset Allocation is underweight equities relative to our benchmark.