Market Review:  The stock market rally accelerated in August, and the S&P 500 increased by 7.2%, which was its best August since 1986. The S&P 500 closed August at an all-time high and posted the fastest recovery from a 30% decline in market history. During this "risk-on" environment, the safe havens were mixed – gold was flat, the long-term U.S. Treasury bond fell by 5.1%, and the 10-year U.S. Treasury bond yield rose by 15bps to 0.69%.

Although Congress failed to pass a new coronavirus stimulus bill, and the high-frequency economic data softened, investors were encouraged by the decline in new virus cases and the Fed's announcement that it is shifting to "average inflation targeting," which means interest rates will remain at 0% for the foreseeable future.

Since the March panic-low, the S&P 500 has rallied by nearly 64%, and the tech-heavy NDX 100 has increased by 79% to close August at record highs. In our view, the Fed's aggressive monetary policy (that cut interest rates to 0% and printed nearly $3 trillion to buy financial assets) and rampant speculation by retail investors fueled these incredible rallies.

According to Jay Ritter at the University of Florida, the first day returns of initial public offerings (IPOs) are averaging 42% this year, which is the highest since the 2000 internet bubble. Also, there has been a record investment in special purpose acquisition companies (SPACs) that have no business plan other than to use the IPO proceeds to acquire a private company within a few years.

These signs of excessive speculation continued in August. Apple and Tesla shares jumped to record highs after each company announced plans to split their stock. Although stock splits have no impact on a company's fundamentals, investors drove Apple and Tesla up by 34%, and 81%, respectively, post the announcements. After the split, Apple became the first U.S. company with a market value of $2 trillion.

Also, SoftBank Group, a large Japanese investment firm, allegedly bought large positions in mega-cap tech stocks and then purchased billions of dollars of deep out-of-the-money calls to force options dealers to hedge their positions by buying large amounts of the underlying stocks. The combination of investors chasing the momentum stocks and SoftBank's alleged manipulation drove the technology sector of the S&P 500 higher by 11.9% in August. This type of rampant speculation typically occurs at the end of market rallies, and since the technology sector has plunged by nearly 10% in September, we believe the prodigious five-month rally is over.

Year-to-date (through September 18th), the market breadth remains poor. Technology, Consumer Discretionary, and Communication Service, which are dominated by the mega-cap stocks (Facebook, Apple, Amazon, Microsoft, and Google), have had a strong year while the other sectors are flat or down this year. In fact, despite the 64% rally off the March low, five of the S&P 500's eleven sectors remain negative for the year. During this volatile and challenging year, the safe havens – gold and the long bond continue to perform very well.

We remain focused on the Financial sector, which continues to disappoint. The Financials are down by 19.8% this year and have fallen by 13.5% over the past twelve months. This poor performance is concerning since the financials play a critical role in funding economic growth, and they typically begin to outperform the S&P 500 five months before the economic expansion starts. Since the Financials continue to lag the S&P 500 significantly, we believe that economic growth will disappoint, and the market is poised for a sharp correction.

The benchmark for our model portfolio is the Traditional Blend — 60% equity, 40% bonds. Our goal is to outperform the benchmark with less risk. To outperform, our investment universe is diversified and economically balanced. We eliminate laggards and tilt the portfolio toward our location in the business cycle. Finally, we risk-weight our positions to manage volatility.

Our model portfolio is invested in the defensive sectors of the market. We are long the Quality and Minimum Volatility Factors, and the Healthcare, Consumer Staples, and Utility sectors of the market. Our only economically sensitive exposure is to the Consumer Discretionary and Communications sectors. Also, we are invested in gold mining stocks (ASA, a closed-end fund) that should benefit from higher gold prices and an industry that is rapidly consolidating after a long period of underinvestment.

We remain long the safe havens (gold and long-term U.S. Treasury bonds), and we recently added Treasury Inflation-Protected Securities (TIPS), which are bonds that protect from inflation.  From a risk perspective, we remain defensively positioned relative to our benchmark.

Historically, the 60/40 portfolio had an equtiy risk weighting of around 0.60%. Currently, our equity risk level is inline with the benchmark’s historic average, but we are only 33.6% invested in stocks, because the market’s volatility is significantly elevated. Our risk exposure is allocated 52% to equities, 29% to gold, and 19% to fixed income, while our 60/40 benchmark has 89.6% of its risk allocated to equities (see table below)

We believe that our high quality, defensive portfolio should outperform our benchmark during this volatile period of considerable economic uncertainty. 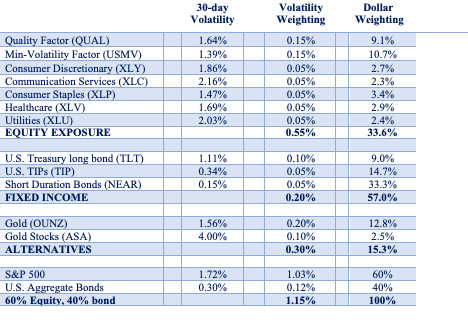 For several months, we were concerned that the financial markets became disconnected from the economy because of the Fed's massive monetary intervention and rampant speculation by retail investors. The S&P 500 and the tech-heavy NDX 100 advanced by 15.7% and 22.5%, respectively, in July and August, despite the tremendous uncertainty over the virus and the global recession. Since only a few mega-cap technology stocks drove the market rally, the breadth of the market was very poor, which typically indicates a vulnerable market.

In September, the market reversed sharply, and selling in the overbought, overvalued technology sector drove the market lower. What started as profit-taking in the technology sector led to more aggressive broad-based selling, as investors focused on Congress's failure to pass a stimulus bill, election uncertainty, and the recent Coronavirus spike in Europe.  Currently, the S&P 500 is down by 7.5%, while the NDX 100 and small-cap Russell 2000 are down 10.6% and 5.7%, respectively, in September.

While a sharp correction, after an epic five-month rally, shouldn't be a surprise, we are concerned that the current sell-off could turn into another bear market decline. While the stock market rallied 64%, there was little improvement in the economy or stopping the virus. Despite the unprecedented monetary and fiscal intervention, the economy has lost 11.6 million jobs since February. Although the job market has improved since the April trough, the current year-over-year employment loss is 6.8%, which remains the sharpest decline since WWII (see chart below).

Unfortunately, since it appears that a vaccine will not be widely available until next summer, and a fall surge is likely, parts of the economy will continue to operate significantly below capacity for the foreseeable future.  The yield curve, which is a reliable indicator of future economic growth, remains flat and confirms an environment of weak economic growth (see chart below).

Since the Fed is supporting the financial markets by printing and buying $120 billion of bonds each month, it is difficult to know if this sharp correction will turn into another bear market. While the Fed's monetary intervention didn't lead to economic recovery, its policy "successfully" debased the dollar and inflated stocks. After recently reaching a two-year low, the dollar has started to rally, which could lead to lower stock prices and a deflationary economic environment. Since it will be difficult for the Fed to intervene in the financial markets so close to the election, we will closely watch the dollar to better estimate the extent of the market correction.

Our short-term (three-months) outlook is negative:

The bubble in mega-tech stocks burst, and stocks are in a sharp correction. Several weeks ago, the market was overbought, market breadth was weak, and extreme optimism and speculation were rampant. We expect to increase our tactical risk exposure when investors are fearful, the market is oversold, and breadth improves. Unfortunately, we don't expect a significant short-term bottom until the election is decided. 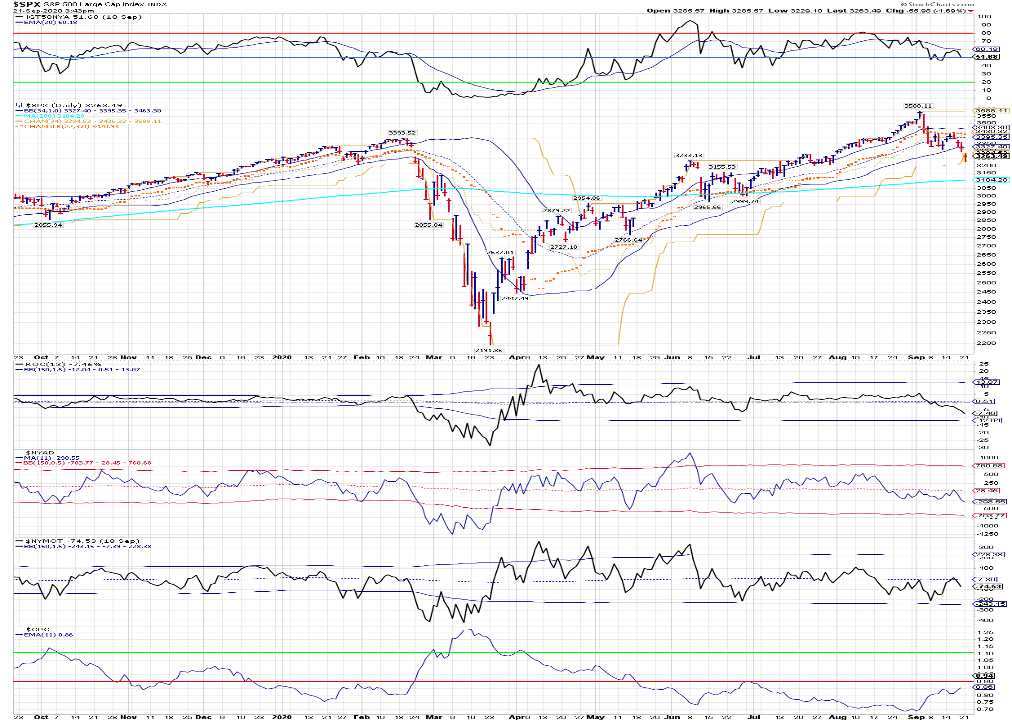 Our long-term (more than four years) outlook is negative:

We believe that stocks offer a poor long-term risk-reward, and we remain underweight equities relative to our benchmark. While the S&P 500 closed at a record high in August, most stocks were below their 200-day moving average and in a bear market. Currently, stocks are expensive, the year-over-year growth rate is deeply negative, and corporate debt is at a record level.  We will remain defensively postured until the market offers a favorable risk-reward, i.e., valuations improve, balance sheet are repaired, and economic growth accelerates. Our Strategic Asset Allocation is underweight equities relative to our benchmark; we are invested in the defensive sectors of the S&P 500 and the safe havens (gold and the U.S. long-bond).

The Fed's massive liquidity injection, coupled with investors flight to the safety of the mega-cap technology stocks (Facebook, Apple, Amazon, Google, and Microsoft) drove the S&P 500 to an all-time high in August, despite the severe recession, 11.6 million jobs losses since February and little progress containing the virus.

The Fed's market intervention led to a speculative bubble in mega-cap technology stocks. It appears that the bubble has burst, and we are in a sharp correction. Since the financial markets are dislocated from the economy, it is difficult to estimate the extent of the decline, especially because the Fed continues to print and buy $120 billion of financial assets each month. Since additional Fed intervention is unlikely until after the election and another fiscal stimulus package is doubtful, we believe the market will not make a significant bottom until the election outcome is decided. Since the market is in a correction and offers a poor long-term risk-reward, we will remain defensively postured and focused on preserving capital.

We strongly believe that the key to growing wealth and compounding at an optimal rate is to avoid significant drawdowns, which typically appear in high-risk periods similar to today. We will continue to focus on preserving capital during this volatile and uncertain time. Protecting capital will ensure that we will have significant cash available to take advantage of the substantial opportunities when the recession is over, the virus is contained, and stocks offer a favorable risk-reward.

If there are any questions or comments, please do not hesitate to contact me directly.

If there are any questions or comments, please do not hesitate to contact me directly.

All information disclosed in this statement is accurate and complete to the best of our knowledge. Past performance is no guarantee of future results, and there is no assurance that the firm or client's investment objectives will be achieved.