Inflation is Surging, yet Interest Rates are Falling. What is More Important the Fundamentals, or the Liquidity Flows?

S&P 500 closed at a record high in June, fueled by the economic reopening and the historic level of fiscal and monetary stimulus. Despite the S&P 500's record high, the stock markets' breadth has been deteriorating, which typically presages a market correction.

In June, economic data was robust, and consumer prices surged by more than 5% over the past twelve months. The Fed stressed that the inflationary spike was temporary and due to short-term supply chain issues and base effects from the pandemic shutdown.

While inflation was greater than expected, interest rates declined, and the yield curve flattened, which typically indicates an economic slowdown is approaching. Equity investors took their cue from the bond market and rotated out of the economically sensitive sectors (financials, industrials, materials, and energy) and into the growth sectors of the market that benefit from low-interest rates.

Our portfolio was positioned for a reflationary economic environment (accelerating growth and inflation), which should have thrived in a period of stronger than expected economic data.  Unfortunately, investors viewed the robust data as a likely economic peak and "sold on the news," which led to our relative underperformance versus our benchmark (60% equities, 40% fixed income).

Despite stronger than expected growth and inflation data, long-term interest rates have plunged over the past month. Many pundits believe that the sharp drop is signaling a peak in growth or pending economic weakness, likely due to the global spread of the COVID delta variant or the economic slowdown in China. While the growth rate may have peaked from an unsustainable level, the economy and inflation are too strong to justify a 1.20% U.S. Treasury bond. We believe that the enormous liquidity created by the global central bankers is overwhelming the fundamentals, driving yields artificially lower and giving investors false signals about the economy's health.

We expect that growth and inflation will continue to be stronger than expected as growth in the labor force accelerates, consumers spend their excess savings, and Europe's economy reopens from its COVID lockdown. We believe that interest rates will rise, and the oversold economically sensitive sectors (financials, industrials, materials, and energy) will outperform.

The S&P 500 closed the first half of 2021 at a record high as the vaccine rollout and economic reopening accelerated. The market rally was bolstered by a historic level of monetary and fiscal stimulus. Despite the recent inflationary surge, the Fed reiterated that they were in "no hurry" to reduce monetary stimulus because they believed the price increase was transitory.

Investors reacted to the flattening yield curve by aggressively rotating from the economically sensitive value sectors of the market to the interest-sensitive growth sectors. In June, the interest-sensitive Russell 1000 Growth index jumped by 6.3%, while the Russell 1000 Value index fell by 1.1% -- i.e., growth outperformed value by 7.4% in June. Year-to-date through June 31st, the value sector has outperformed the growth sector by 4.0%.

By most valuation measurements, the stock market has never been more expensive. According to Factset, the forward 12-month P/E ratio for the S&P 500 is 21.4, which is 32% above the 10-year average of 16.2. We believe that stocks are extremely overvalued and offer a poor long-term risk-reward.

As the economy recovered and inflation accelerated to more than 5% in June, the Federal Reserve announced that they began to discuss reducing the number of bonds they purchase each month thru their QE policy. Also, they stated that the inflationary spike would prove temporary since it's caused by supply chain disruptions and base effects from the pandemic economic shutdown.

Despite greater than expected inflation, the surging stock, commodity, and housing markets, the Fed decided not to remove any of their emergency monetary policies. Instead, Fed Chairman Powell announced that they were "talking about talking about" tapering the number of bonds they are purchasing each month. Currently, the U.S. 10-year Treasury bond yields 1.2%, yet the Fed is buying $80 billion of U.S. Treasury bonds each month. Additionally, the surging housing market is reaching bubble territory and pricing many potential homebuyers out of the market, yet the Fed continues to purchase $40 billion of mortgages each month to drive mortgage rates lower and stimulate demand.

While the Fed believes that inflation is due to transitory issues, they fail to consider the impact of their profligate monetary policy on the economy and financial markets. According to famed economist Milton Friedman, "Inflation is always and everywhere a monetary phenomenon in the sense that it is and can be produced only by a more rapid increase in the quantity of money than in output."

Over the past sixteen months, the Fed has increased the quantity of money to an unprecedented level. We believe that this unprecedented increase in the money supply is responsible for the inflationary surge and booming asset prices (stocks, housing, and commodities). Also, we are concerned that their massive bond-buying program is driving interest rates artificially lower and distorting the bond market's economic signals, which leads to a misallocation of capital.

Although the Fed is confident that inflation is transitory, other former officials are concerned. Previously, Larry Summers, President Clinton's Treasury Secretary, said this "is the least responsible macroeconomic policies we've had in the last 40 years." This week, Peter Fisher, former number two at the New York Fed, said, "I think the odds are very high that we will look at this as an epic mistake and one of the great financial calamities of all time."

Chart 1: In June, CPI Inflation surged to 5.4%, which is near a multi-decade high. While the Fed believes this increase is "transitory," booming equity, housing, and commodity markets may indicate that the Fed induced a financial bubble.

Chart 2: While inflation surged, economic growth remained robust in June. The ISM Manufacturing PMI remained above 60, which is near a multi-decade high. 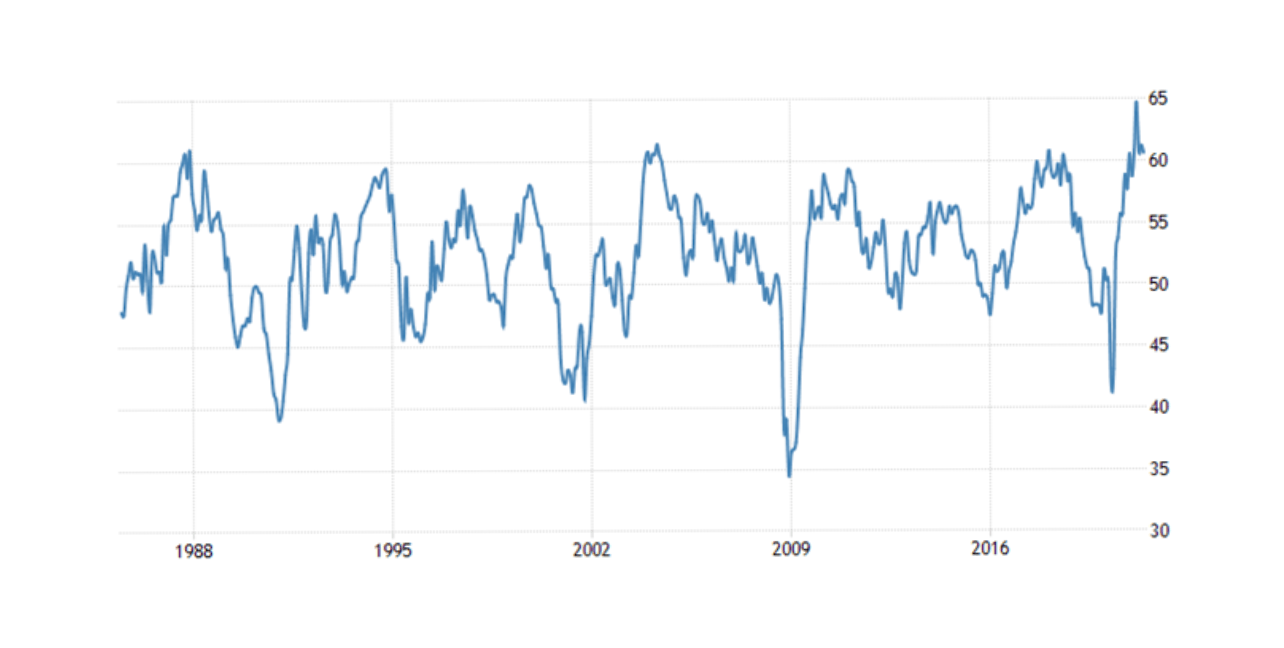 While growth and inflation surged during June, the bond yields fell, and the yield curve flattened, which isn't consistent with an improving economy, and typically presages an economic slowdown. Investors followed the cautionary message from the bond market and rotated from the economically sensitive to the growth sectors of the market. While the bond market and especially the yield curve have been superior leading indicators of the economy, we are concerned that the Fed's massive Quantitative Easing program -- that prints and buys $120 billion of bonds each month – is distorting the bond market's economic signal.

We believe that liquidity flows and not fundamentals drove the 10-year UST bond to 1.2%, and interest rates are poised to significantly increase this fall as the economy and inflation continue to surge. We expect the historic level of monetary and fiscal policy will drive growth and inflation higher. Also, we expect the labor market to surge as the federal pandemic unemployment assistance ("PUA")is eliminated and schools reopen, which allows many caregivers to go back to work. Finally, the European economies are reopening after their COVID lockdowns, which will spur global growth. In this reflationary environment, we expect the economically sensitive sectors of the market and commodities to outperform.

Chart 3: Despite higher-than-expected growth and inflation, long-term interest rates fell, and the yield curve flattened, which typically portends economic weakness. Investors heeded the bond market's signal and rotated from the value to the growth sector of the market. 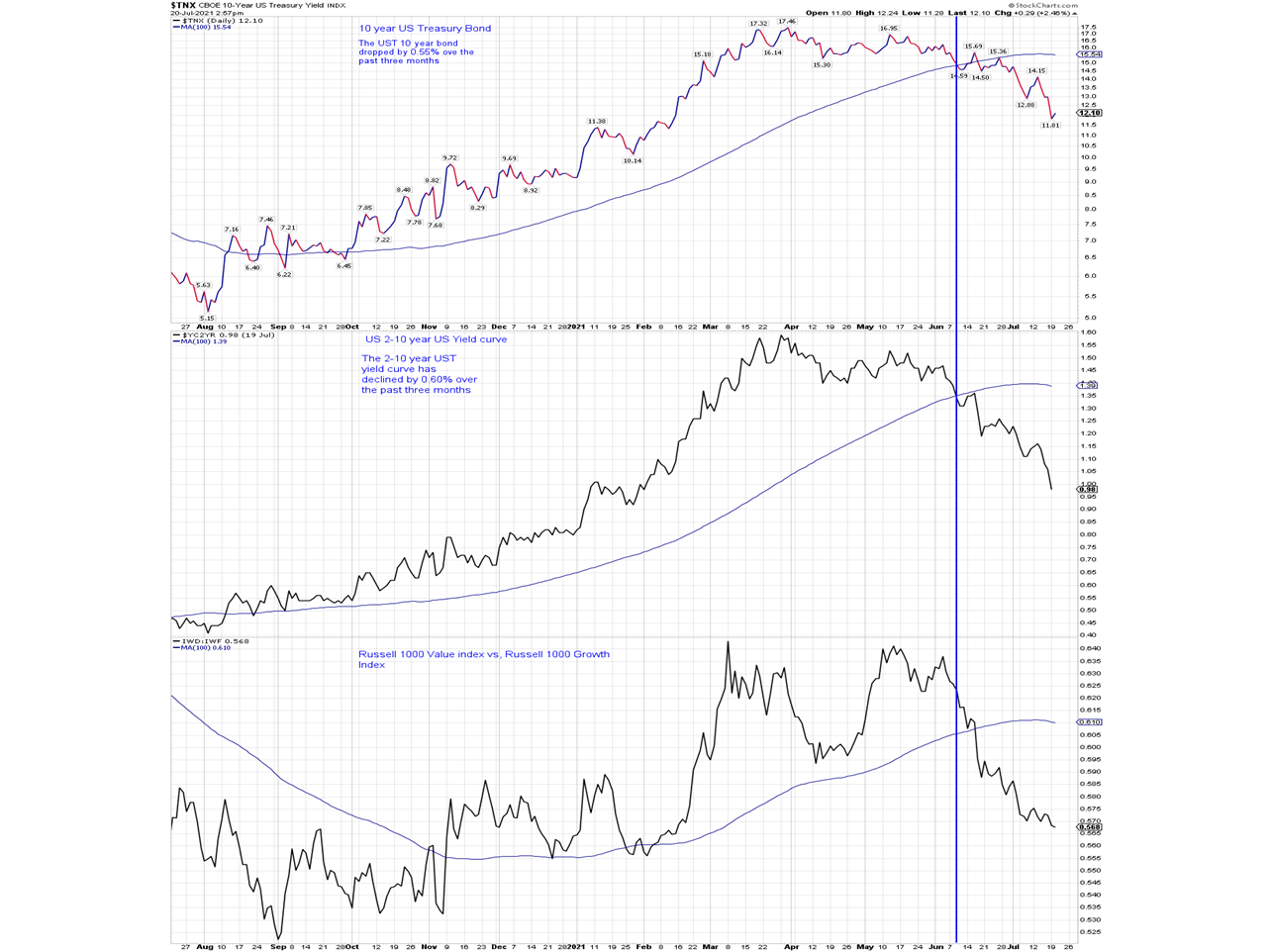 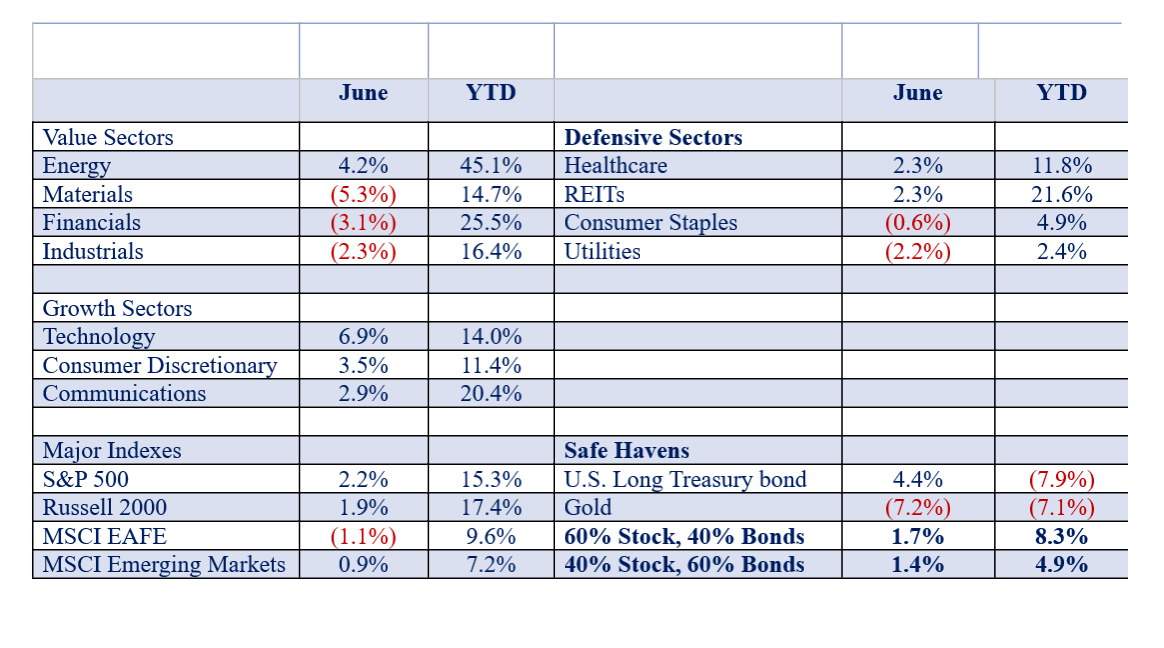 We remain positioned for a reflationary economic environment (accelerating growth and inflation). We are concerned that significant monetary and fiscal policy errors could lead to an inflation problem in the second half as the global economy accelerates and interest rates increase.

Our core positions are in the economically sensitive sectors of the market (industrials, financials, and Energy), commodities, and TIP's (U.S. Treasury Inflation-Protected Securities). We remain underweight equities and fixed income duration and overweight commodities relative to our benchmark. Our portfolio's annualized volatility is 11.6%, which is greater than our benchmark. 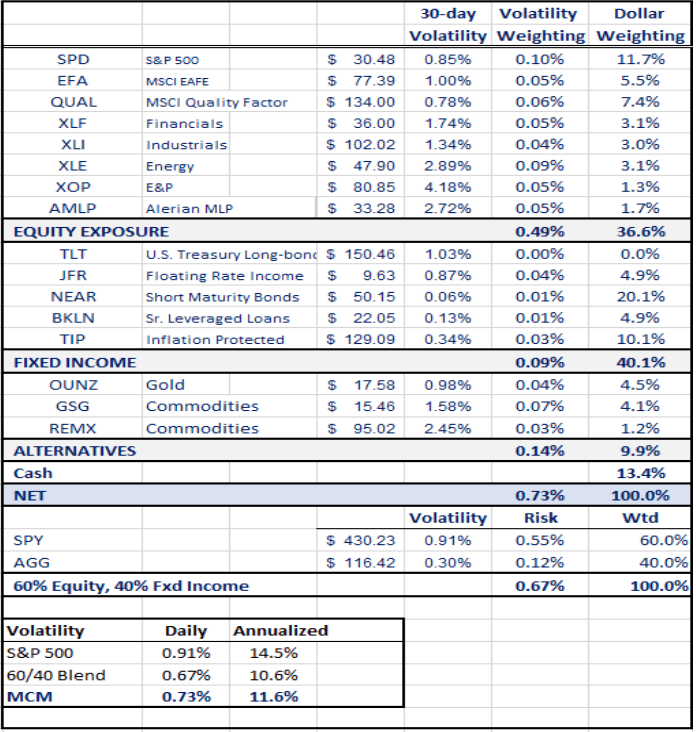 When can you retire?

What is your optimal level of portfolio risk and how much risk is currently in your portfolio?

How can you get more return while taking less risk?

We discuss your situation -- goals, objectives, experiences and concerns.

When can you retire?

What is your optimal level of portfolio risk and how much risk is currently in your portfolio?

How can you get more return while taking less risk?

We believe that the market offers a poor short-term risk-reward because investors are complacent, and market breadth is deteriorating. While the S&P 500 reached a record high on July 14th, the small-cap Russell 2000 and the Dow Transportation Average peaked on March 15th and May 10th.  Divergences and narrowing market breadth typically presage a market correction, which after the market's record run, would be healthy and reduce some market excesses. When investors are fearful, the market is oversold, and breadth begins to improve, we will increase our tactical risk exposure. Our short-term market outlook is neutral.

We believe that the S&P 500 offers a poor risk-reward because it is extremely overvalued. Also, we are concerned about the long-term unintended consequence of the unprecedented monetary and fiscal policy that was used to combat the pandemic.  Artificially low-interest rates and historic peacetime deficits have led to a record debt burden, which will become problematic as the economy grows, and interest rates normalize. In the second half of 2021, we continue to see a significant opportunity to invest in the value sectors of the market while avoiding the mega-cap tech and the S&P 500. While we expect to profit from the reflationary rotation into the cyclical stocks, longer-term, we remain concerned about the impact rising interest rates will have on stock valuations. Our Strategic Asset Allocation is underweight equities relative to our benchmark.