After a brief November selloff, the stock market rallied in December due to strong year-end fund flows and the belief that the Omicron variant would not have a significant adverse economic impact. The S&P 500 rose by 4.6%, while the small-cap Russell 2000 increased by 2.3% in December. The Foreign markets also rallied, the MSCI EAFE index of international stocks, and the MSCI Emerging market index improved by 4.4% and 1.5%, respectively.

In December, value stocks outperformed growth by 4.3% -- the Russell 1000 Value index rallied by 6.3%, while the Russell 1000 Growth rose by only 2.0%. All of the sectors of the S&P 500 advanced in December. Interestingly, the Defensive Sector outperformed during this "Risk-on" environment, and this market action seems to have presaged the January market decline. 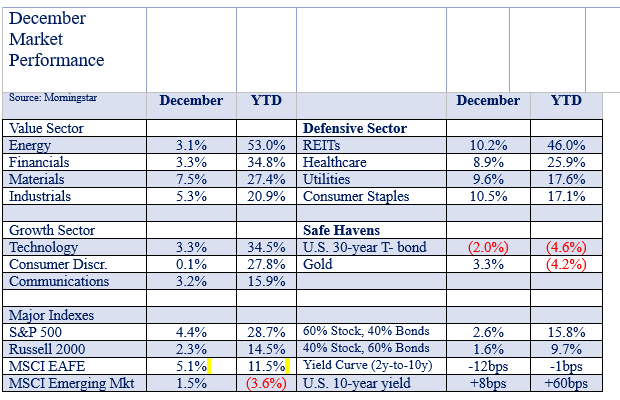 In our view, the S&P 500 has become detached from the fundamentals because of the unprecedented amount of liquidity in the financial system and the dominance of passive investing. We are concerned that the factors that drove stocks to record valuation levels can rapidly unwind and lead to significant volatility and sharp market declines.

Since the Great Recession of 2008, passive investing has grown at the expense of active/fundamental investing. Currently, more than 50% of equities are invested passively -- i.e., not for fundamental or valuation reasons. Since passive funds buy and sell stocks solely based on flows, not fundamentals, the supply of shares available for trading is effectively reduced.

Since the passive investment vehicles (primarily ETF's) are more liquid than many of the underlying stocks they hold, the flows in and out of the passive funds can have an exaggerated effect on the underlying stocks and the overall market. Also, since most passive indexes market capitalization-weighted, flows are allocated to the large companies, not necessarily the cheapest or highest quality. Currently, 25% of a new investment in the S&P 500 is allocated to the largest six companies (Apple, Microsoft, Google, Amazon, Tesla, and Facebook) in the index, at the expense of the remaining 450 stocks.

We believe that the S&P 500's outperformance is because passive investing has created an inelastic equity market, which is driven by flows and demand shocks, not fundamental or valuation changes. Also, since valuation is not a factor in passive investing, there is a positive feedback cycle: investment flows into passive funds have an outsized impact on the underlying securities, which pushes the market value higher, attracts more flows, and creates higher prices.

In our view, the Fed's emergency monetary measures (Quantitative Easing and negative real interest rates) led to record equity inflows due to a historic level of shareholder buybacks, M&A activity, and retail investment. This unprecedented level of equity inflows was magnified in the S&P 500 because passive investing has essentially reduced the available supply of stock. This surge in liquidity drove the stock market to a record valuation level.

Chart 1: Artificially low-interest rates gave corporations the incentive to "buy not build," so corporate buybacks and M&A surged to a record level in 2021.

Chart 2: According to Bank of America, $1.1 trillion flowed into equities in 2021, which was more than the inflows of the previous 19 years combined.

Chart 3: In addition to record buybacks and retail inflows, stocks were driven higher by a record level margin debt.

Chart 4: Liquidity, not fundamentals, drove the equity market to a record valuation. Warren Buffet stated, "Market Value to GDP is probably the best single measure of where valuations stand at any given moment." Unfortunately, valuation has never been higher.

We believe the Fed's emergency monetary measures drove asset prices higher and created an inflationary surge. To stabilize the economy during the pandemic, the Federal Reserve deployed unprecedented emergency measures that, in our view, created asset bubbles and an inflationary surge. Since March of 2020, the Fed "printed" $4.6 trillion to buy U.S. Treasury and mortgage bonds and set short-term interest rates at 0%, which is currently 7% below inflation (inflation is a wealth tax).

Chart 5: Since March of 2020, the Fed grew its balance sheet from $4.16 trillion to $8.9 trillion, which is currently a record 38% of GDP. The Fed's profligate monetary policy led to a historic surge in the money supply.

Chart 6: Milton Freidman believed that "Inflation is always and everywhere a monetary phenomenon in the sense that it is and can be produced only by a more rapid increase in the quantity of money than in output." The Fed's emergency monetary policy led to a surge in the money supply and contributed to the inflation problem.

Chart 7: Inflation has remained above 5% for the past eight months, and the Fed has not tightened monetary policy; they only reduced the level of stimulus. Since monetary policy acts with a 12-to 24-month lag, we do not expect inflation to recede until the Fed aggressively tightens monetary policy. Historically, inflation greater than 5% led to recession. 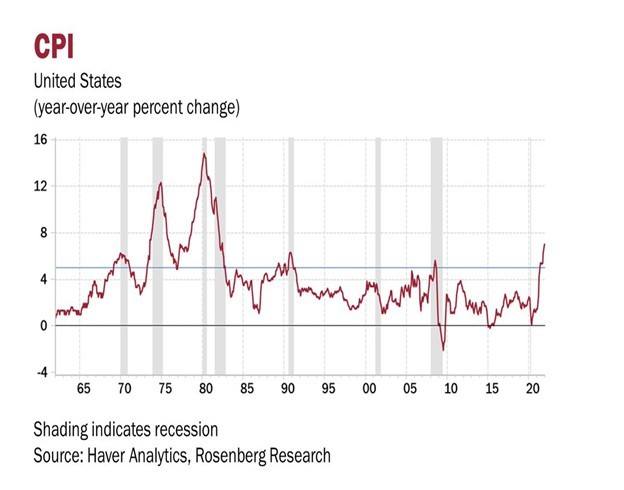 We believe that inflation will remain elevated for the foreseeable future because of the massive increase in the money supply and the more than ten years of underinvestment in the energy, commodity, and housing markets. Additionally, it appears that the Fed's analysis of the labor market was also incorrect. Currently, the unemployment rate is 3.9%, and there are more available jobs than unemployed people (10.6 mm jobs available vs. 6.3mm unemployed).

Finally, many blame inflation on supply chain issues. While there were supply chain dislocations due to the pandemic shutdown and the sudden economic reopening, the problem was that demand surged due to record fiscal and monetary stimulus and pent-up demand.

Chart 8: Once the economy reopened, demand surged, which led to shortages and higher prices. Retail sales jumped 19.2% above the pre-pandemic peak and remain significantly above the long-term trend.

The Fed's monetary policy led to asset bubbles and an inflationary surge. Despite inflation at a 40-year high, the Fed has not removed their emergency monetary measures; they only reduced the level of stimulus. Since monetary policy acts with a lag, and there are structural supply shortages in the energy, commodity, labor, and housing markets, we believe inflation will stay elevated until the Fed tightens enough to reduce demand, leading to a bear market potentially a recession next year.

For most of last year, we believed the Fed's policy would lead to an inflation problem and a tighter monetary policy, which would hurt stocks. The Fed waited too long to change policy, and now investors are fearful they will make a monetary mistake that could lead to recession. January's sharp market decline was caused by fearful investors suddenly trying to get out of an illiquid market dominated by passive investing. We expect the Fed to assuage investors' fears this Wednesday, and the oversold market will rally for the next few weeks. We believe this rally will be an excellent opportunity to reduce risk.

While we remain positioned for an inflationary economic environment, we are concerned that the accelerating inflation could lead to a significant monetary mistake by the Fed, leading to a bear market or an economic recession. We remain underweight equities, fixed income duration, and overweight commodities relative to our benchmark. We will focus on capital preservation and reducing volatility in this risky and uncertain environment.

Our portfolio's risk level (annualized volatility) is 12.5%, which is significantly less than our 60/40 benchmark. 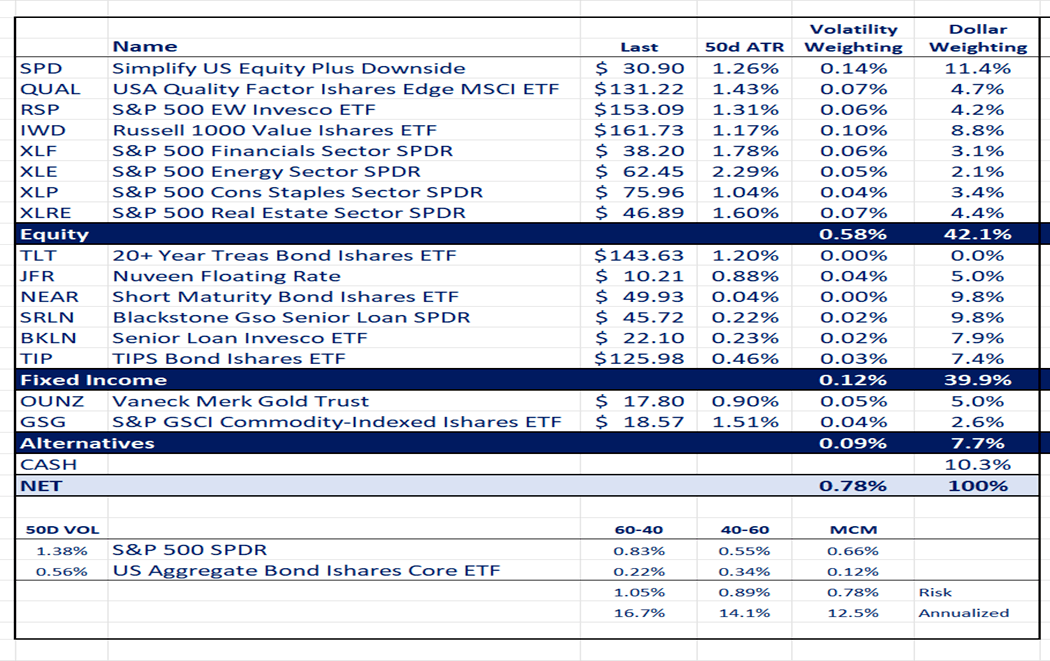 After reaching an all-time high on January 4th, the S&P 500 has dropped by 12.4% due to fears that the Fed will make a monetary mistake while trying to reduce inflation and crash the inflated stock market. The market is very oversold, investors are fearful, and we believe the Fed will assuage investors' fears during their meeting this Wednesday. We think the market will rally for the next few weeks and then retest this recent low in late February or early March. It will be essential to monitor investor sentiment and the market's breadth on the retest to determine whether or not we are on the cusp of a bear market.

We believe that the S&P 500 offers a poor risk-reward because it is extremely overvalued. Also, we are concerned about the long-term unintended consequence of the unprecedented monetary and fiscal policy that was used to combat the pandemic. Artificially low-interest rates and historic peacetime deficits have led to a record debt burden, which will become problematic as the economy grows, and interest rates normalize. We continue to see a significant opportunity to invest in the value sectors of the market while avoiding the mega-cap tech stocks and the S&P 500. While we expect to profit from the reflationary rotation into the cyclical stocks, longer-term, we remain concerned about the impact rising interest rates will have on profitability and stock valuations. Our Strategic Asset Allocation is underweight equities relative to our benchmark.