The bear market accelerated in June as the Fed aggressively raised interest rates to fight inflation, which is at a forty-year high. The S&P 500 declined by 8.4% in June and finished the first half of 2022 down 21%, which was its worst first half since 1970.

Bonds, which typically protect portfolios during bear markets, also performed poorly in the first half. The Bloomberg U.S. Aggregate bond index dropped by 10%, contributing to the traditional 60/40 portfolio's drop of 16.5%, which was its worst performance since the Great Depression.

In June, the small-cap Russell 2000 and the NASDAQ Composite fell by 8.4% and 8.7%, respectively. The foreign markets also dropped sharply -- MSCI EAFE index of international stocks and the MSCI Emerging market index declined by 8.8% and 5.2%, respectively.

The primary catalyst for June's sharp market decline was the Fed's aggressive response to worsening inflation reports. On June 15th, the Fed increased interest rates by 0.75%, which was the largest hike since 1994, because consumer prices surged by 8.6% over the past year, and the University of Michigan gauge of the consumer's five-year inflation expectations rose to 3.3% -- its highest level in more than a decade. Investors feared that accelerating inflation and the Fed's aggressive actions would push the economy into recession.

The Fed's monetary mistakes led to massive asset bubbles and drove inflation to a 40-year high. This year interest rates spiked higher, which drove stocks into a bear market. We believe that the first leg of the bear market that was driven by higher interest rates and falling valuations ended in mid-June, and we are currently in a counter-trend bear market rally. Once the bear market rally ends, we expect stocks to move lower as the economy weakens and earnings expectations are significantly reduced.

During the pandemic, the Federal Reserve and the Government used unprecedented monetary and fiscal stimulus to support the economy during the Covid lockdowns. As the economy reopened stock prices, economic growth and inflation surged, yet the Fed failed to reduce any of its emergency monetary measures. From March 2000 to March 2022, the Fed "printed" $4.6 trillion (18.5% of GDP), which created massive asset bubbles and drove inflation to a 40-year high. Despite inflation surging to a 40-year high last fall, the Fed kept interest rates at 0%, and they continued to print billions of dollars each month to buy treasury and mortgage bonds. Finally, as inflation hit 8.5% this March, the Fed ended its bond-buying program and increased short-term interest rates to a paltry 0.25%.

In January, the bond investors finally realized the Fed was making a substantial monetary mistake, and they pushed interest rates sharply higher. Since companies are worth the present value of their future cash flows when interest rates rise, the company's value declines. This year's sharp increase in interest rates created a bear market by driving stock valuations from overvalued to fairly valued.

In December, inflation was 7%, yet the U.S. 2-year note yielded only 0.8% because the Fed stated the inflation was "transitory." This year, it was clear that the Fed was wrong, and investors pushed the 2-year yield up 2.6 percent in 5 months. This sudden increase in interest rates drove the S&P 500 into a bear market. 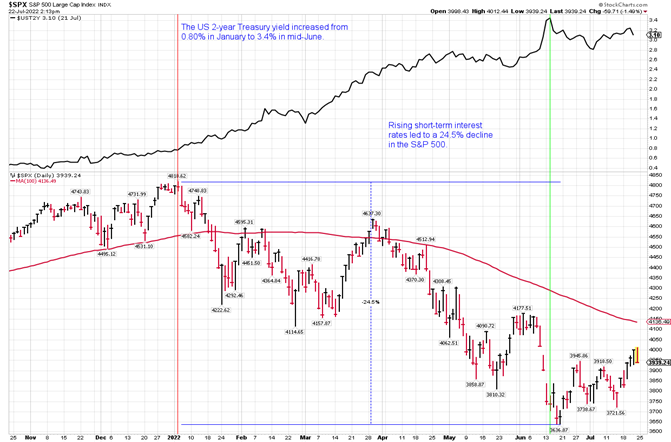 This year, the S&P 500 fell by 24.5%, which was its worst first half since 1970. During the bear market decline, Wall Street analysts increased their earnings estimate by 1.9%, which is a 7.7% increase over 2021. As the inflation burden and higher interest rates slow the economy, we believe that analysts will aggressively cut their earnings estimates, which will lead to another bear market decline later this summer.

As discussed last month, stocks were extremely oversold, investors were fearful, and we believed stocks were poised for a significant bear market rally. Since its mid-June low, the S&P 500 has rallied by 10% because investors believe that falling commodity prices signal that inflation has peaked and the Fed can temper its interest rate hiking policy. Once stocks are overbought and investors are again complacent, we expect economic weakness and declining earnings expectations will be the catalyst for the next leg of the bear market.

Once the market is overbought, and investors are complacent, we believe the bear market will resume. The market will be susceptible to another decline when approximately 70% of NYSE stocks exceed their 50-day moving average and there are more AAII Bulls than Bears. Also, the Vix curve should be in steep contango. 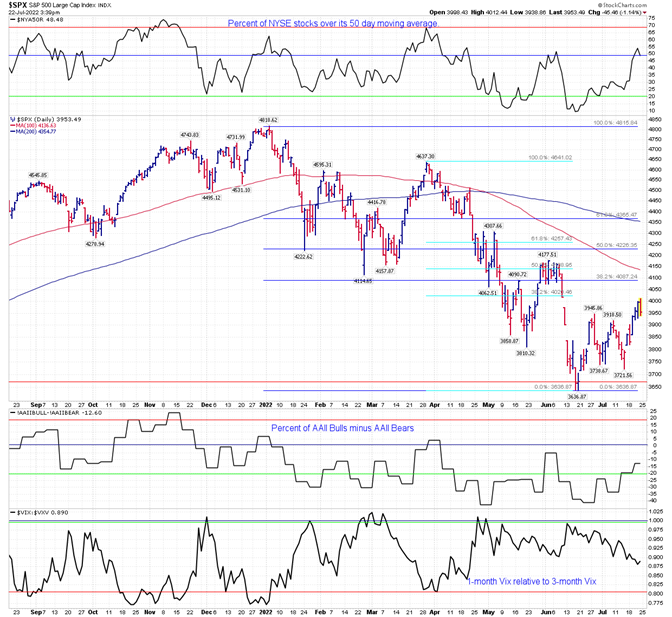 On June 15th, the Fed hiked interest rates by 0.75%, which was the largest increase in nearly 30 years. The Fed also indicated that another 0.75% hike was likely at the Fed's next meeting on July 27th, which would raise short-term rates to 2.5%. Tighter monetary conditions and the Fed's hawkish forward guidance led to an inverted yield curve and a "crash" in many commodities. An inverted yield curve and falling commodity prices strongly indicate that inflation has peaked and a recession is imminent. 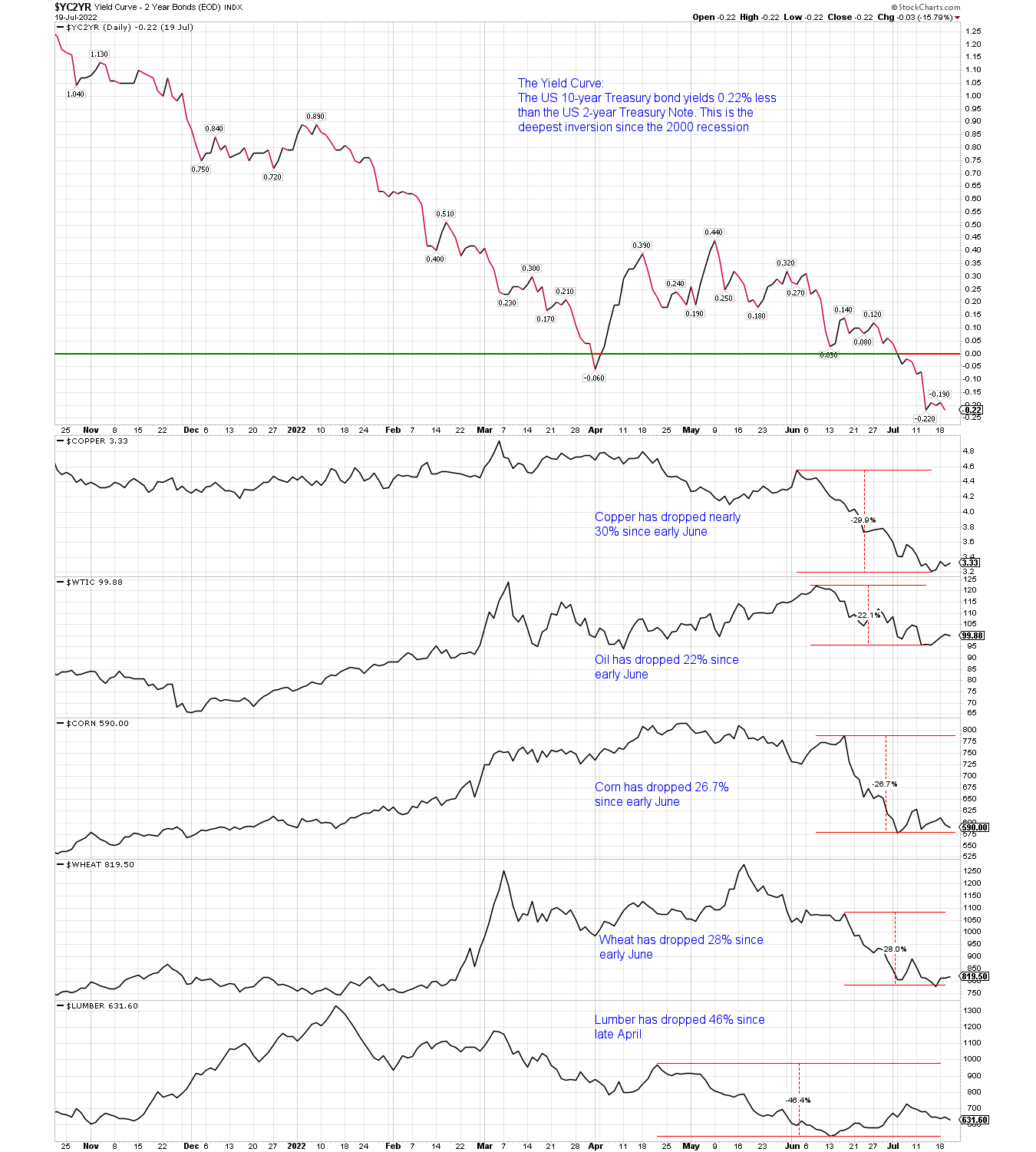 The Fed created many of today's economic problems by printing too much money and maintaining their emergency monetary measures despite asset bubbles and inflation at a 40-year high. In addition to the Fed's monetary mistake (unprecedented increase in the money supply), inflation surged because of global supply chain issues, underinvestment in energy, and the Ukraine war.

The Fed focuses on the demand side of the economy by manipulating interest rates to increase or slow the economy. Since the Fed believes that inflation is a function of too much demand relative to supply, they will hike interest rates and reduce demand until inflation declines to an acceptable level. The problem is that the Fed ignores the massive expansion of the money supply and is targeting its monetary policy to a lagging economic indicator (inflation). Additionally, monetary policy operates with at least a 12-month lag, so today's interest rate hikes won't impact the economy until next summer.

The Fed is again implementing monetary policy through the rearview mirror. Given the historic amount of Federal and corporate debt in the economy, the impact of rising interest rates on growth is unknowable. Yet, the bond, stock, and commodity markets are signaling that the Fed is making a mistake by aggressively tightening into a slowing economy.

In our view, the Fed created asset bubbles and caused inflation to surge to a forty-year high. Now, the Fed will cause a deep recession to beat inflation. Based on the Fed's track record, we believe that its impact on the financial markets and the economy should be reduced.

Since the Great Financial Crisis in 2008, the Fed kept interest rates artificially low, encouraging debt accumulation and leading corporations and entrepreneurs to "buy, not build." Decades of artificially low-interest rates incentivized corporations to buy back their stock and make acquisitions instead of making capital investments, which would grow the economy, increase productivity and improve living standards.

Globalism, technological innovation, and favorable demographics led to nearly forty years of mild inflation, low-interest rates, and rising stock valuations. As globalism and favorable demographics reverse, it is essential to incentivize businesses and entrepreneurs to invest capital to grow the economy's supply side. Capital investment will lead to an increase in productivity, solid economic growth, and benign inflation. In our view, savers and investors should determine interest rates – not an "expert" panel like the Fed.

In July, stocks are rallying because investors believe inflation has peaked and the Fed can soon move to the sideline. We believe this "soft landing" is unlikely, especially since the Fed is focused on lagging economic indicators instead of real-time market-based indicators – yield curve, commodities, and equities.

We are in a bear market, and a recession is likely. We believe it's prudent to look at previous bear markets to understand the magnitude and duration of the current decline. According to BofA Research, the average bear market during an NBER recession is 32.5% over 10 to 13 months. If history is an accurate guide, the S&P 500 will decline to 3250 by this fall. Since we've already dropped by 24.5%, the bulk of the bear market may be behind us. Typically, during mid-term election years, stocks decline into the fall and then rally on average 17.6% off their fourth-quarter low. We believe this scenario is likely if inflation is receding and the Fed indicates it will move to the sidelines.  Also, since inflation has likely peaked and market-based indicators show a recession is likely, we believe long-term Treasury bonds will perform well in the second half of 2022.

As the Fed tightens financial conditions and the credit cycle turns down, we expect the S&P 500 to fall to 3200. A decline to 3200 would retrace 61.8% of the previous bull market and be in line with the average bear market decline of 34%. The S&P would sell at 15.4 times 2021 peak earnings at this level.

The benchmark for our model portfolio is the Traditional Blend — 60% equity, 40% bonds. Our goal is to outperform the benchmark with less risk. To outperform, our investment portfolio is diversified and economically balanced. We eliminate laggards and tilt the portfolio toward our location in the business cycle. Finally, to manage risk, we volatility-weight our positions and set a volatilty target equal to our benchmark's historic risk level. When volatility increases, our asset allocation dynamically reduces our equity risk exposure.

For most of this year, our portfolio was positioned for a Stagflationary economic environment (slowing growth and rising inflation). We were invested in the value and defensive sectors of the market, which typically perform well as growth slows. Also, we were invested in gold, commodities, and short-term TIPS (U.S. Treasury Inflation-Protected Securities), which perform well during periods of elevated inflation.

As discussed last month, history shows that most Fed tightening cycles lead to recession, especially when inflation exceeds 5%. Recently, many market-based signals indicate that inflation has peaked and a recession is imminent. To perform well in a recessionary economic environment (i.e., slowing growth and inflation), we have increased our exposure to the market's defensive sectors. We expect to reduce or eliminate our inflation hedges (commodities and TIPs). Additionally, we will reduce our equity risk exposure as the recent bear market rally becomes overbought and investors become complacent.

In sum, we are in a bear market, volatility remains elevated, and we are headed toward a recession. To preserve capital in this challenging environment, we are underweight equities, overweight the defensive sectors of the market and the safe havens (gold and long-term Treasury bonds), and maintain a large cash balance. We will continue to focus on preserving capital until the economy stabilizes and the market offers a better risk-reward

Our portfolio's risk level (annualized volatility) is 15.0%, which is less than our 60/40 benchmark. 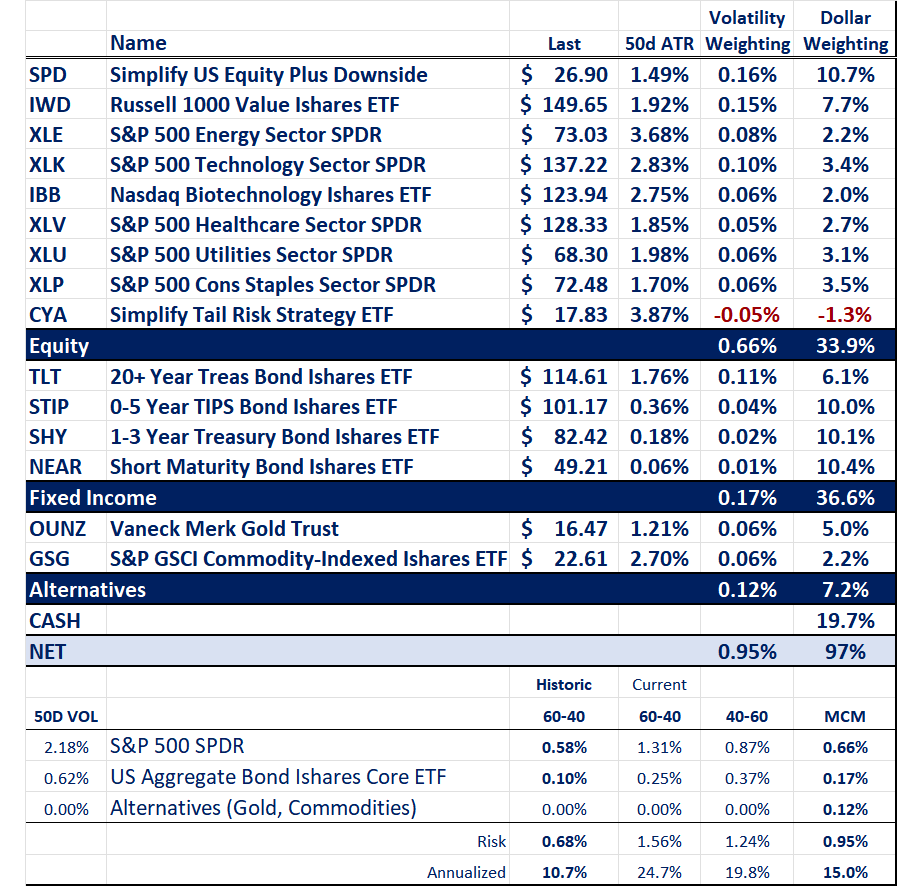