The stock market decline continued in May, and S&P 500 "officially" entered a bear market on May 20th by falling more than 20% from its January all-time high. Interestingly, the S&P rallied 8.4% off its May 20th low to finish flat for the month.

Fundamentally, little changed in May. Investors remained concerned about accelerating inflation, the war in Ukraine, Covid lockdowns in China, and uncertainty over the Fed's ability to curb inflation.

The S&P 500 and the small-cap Russell 2000 increased by 0.2%% in May, while the NASDAQ Composite fell by 2.05%. The foreign markets improved slightly --  the MSCI EAFE index of international stocks and the MSCI Emerging market index rallied by 2.0% and 0.6%, respectively.

The value sector of the market outperformed the growth sector by 4.3% in May (the Russell 1000 Value index rose by 2.0%, while the Russell 1000 Growth fell by 2.3%). We expect this trend will continue until inflation and interest rates peak.

In mid-June, stocks and bonds fell sharply as inflation spiked to 8.6%, and the Fed surprised financial markets by increasing interest rates by 0.75% (the largest increase since 1994) at its June 15th meeting. Previously, Chair Powell stated, "a 75 basis point increase is not something the committee is actively considering." The Fed updated it’s year-end forecast. It expects short-term interest rates to increase to  3.4%, GDP to grow by 1.7%, and PCE inflation to remain elevated at 5.2%. Despite slowing growth and high inflation, the Fed expects the unemployment rate to remain steady at 3.7%.

Although the S&P was essentially unchanged in May, the wide dispersion of returns in the S&P sectors indicates the elevated level of volatility in the market. The value sectors outperformed growth, consistent with an economic period of high inflation. The poor performance of the defensive sectors and safe havens was surprising in this "risk-off" environment. 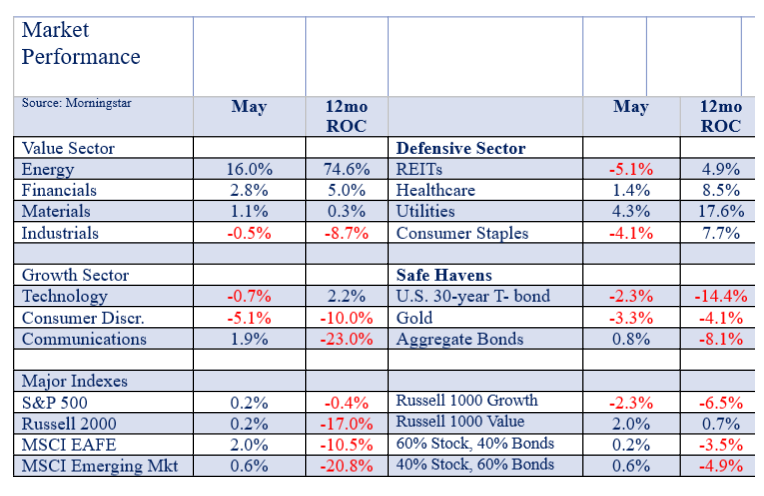 The S&P 500 declined 24.5% from its January high, while the NASDAQ Composite and small-cap Russell 2000 fell by 34.8% and 32.9%, respectively. We believe that the first leg of the bear market is over, and stocks are poised for a significant bear market rally before the next move lower takes place later this summer.

To stabilize the economy during the pandemic, the Federal Reserve and the U.S. Government injected unprecedented monetary and fiscal stimulus into the economy. As the economy recovered and inflation surged, the Fed failed to reduce its emergency measures, which led to financial asset bubbles and drove inflation to a 40-year high.

The Fed insisted that inflation was "transitory," but when inflation accelerated during the fall, investors knew the Fed was wrong and reduced their risk exposure by selling the speculative asset classes. For most stocks, the bear market began in November, while the S&P 500 peaked on January 4th, two months before the Fed's first interest rate hike (and five months before the Fed began selling bonds to reduce its bloated balance sheet).

Despite strong economic growth and high inflation, the Fed maintained its emergency measure, which fueled asset bubbles. When inflation accelerated in the fall, investors reduced their risk level by selling speculative assets. 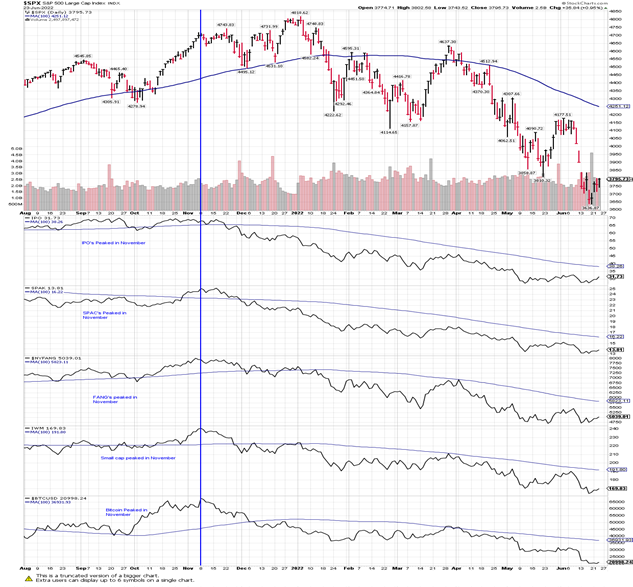 Since companies are worth the present value of their future cash flows when interest rates rise, the company's value declines. This year's sharp increase in interest rates created a bear market by driving stock valuations from overvalued to fairly valued

Late last year, the U.S. 2-year Treasury note yielded 0.7% despite 7% inflation because the Fed thought that inflation was "transitory." Since interest rates were low, the stock market was priced for perfection -- the S&P 500 sold at a P/E of 21.9 times 12-month forward earnings (a 38% premium to its 20-year average P/E). Early this year, it was evident that the Fed was wrong about inflation, and investors drove the 2-year up 2.75% in less than six months. This abrupt increase in interest rates pushed the S&P 500 down 24.5% and into a bear market.

Despite 7% inflation in December, the U.S. 2-year note yielded only 0.7% because the Fed stated the inflation was "transitory." This year, it was clear that the Fed was wrong, and investors pushed the 2-year yield up 2.75 percent in 5.5 months. This sudden increase in interest rates drove the S&P 500 into a bear market. 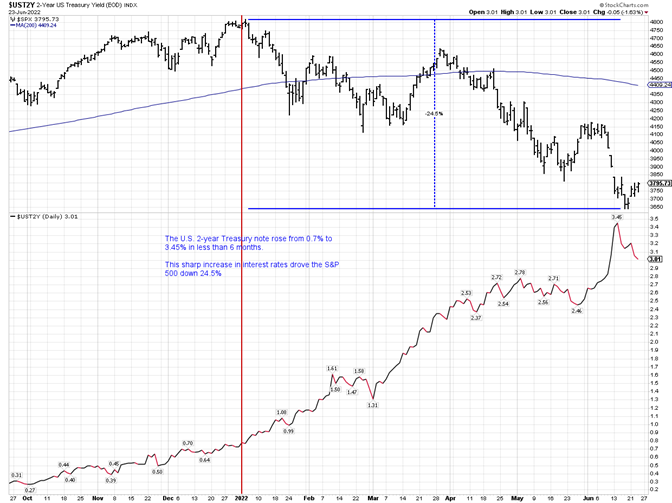 Interestingly, the 24.5% bear market was solely a function of falling valuations, not deteriorating fundamentals. According to S&P/Dow Jones Indicies, Wall Street analysts actually increased their earnings expectations for the S&P 500 while the market was falling. Analysts still believe that earnings will grow by 7.8% this year and 10.6% next year.

This year stocks fell by 24.5%, which was a function of valuations declining by 25.9%, and earnings estimates increasing by 1.9%. We believe that the first leg of the bear market is over, and stocks are poised for a significant bear market rally. While the first leg down was driven by falling valuations (and rising interest rates), we expect that deteriorating fundamentals, recession fears, and declining earnings expectations will be the catalyst for the next leg of the bear market.

The Fed's profligate monetary policy created financial asset bubbles. The S&P 500's valuation level surged due to the Fed's cheap money policy and excess liquidity. Once the Fed indicated it would tighten, the bubbles burst and valuations collapsed.

Based on the AAII survey, investors are more bearish today than during the 2008 financial crisis.  Fearful investors and a deeply oversold market usually yield a significant bear market rally. 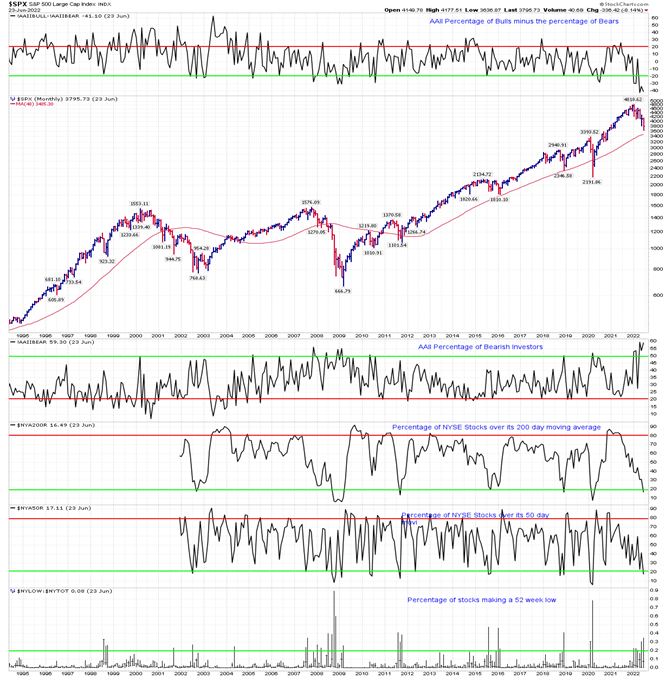 According to S&P/Dow Jones, Wall Street analysts expect S&P 500 earnings to grow by 7.8% this year and 10.6% in 2023. We believe this 19.3% estimated earnings growth ($208.2 in 2021 to $248.4 in 2023) is farcical. The inflation burden and sharply higher interest rates are already slowing economic growth. Historically, once inflation reaches 5%, a recession is inevitable. Also, market-based indicators – the yield curve and the price of copper relative to gold – are indicating an economic slowdown.

Inflation has been above 5 percent for a year. Historically, only a recession tames inflation once it reaches this level. 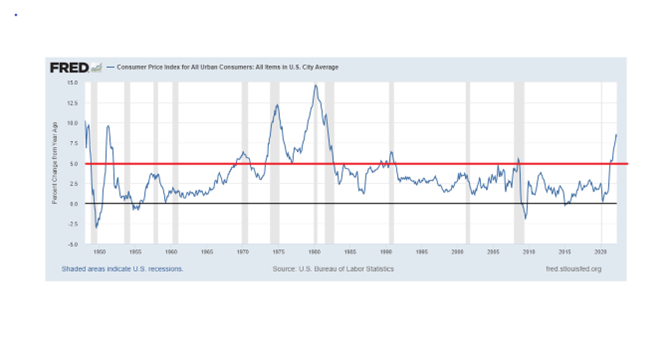 Market-based indicators are indicating an economic slowdown. The yield curve is flat, and the price of economically sensitive copper is plunging.

In fact, the economy may already be in recession. In the first quarter, the economy shrank by 1.5%, and the Atlanta Fed GDPNow forecasts 0% growth in the second quarter (see below).

While high-interest rates and inflation at a 40-year high are obvious headwinds to economic growth, we believe that the tremendous wealth destruction that occurred over the past seven months will lead to a significant slowdown later this year. According to BCA Research, $15.5 trillion was lost this year in the stock and bond market. More wealth was destroyed this year than during the 2000 tech bubble collapse and the 2008 financial crisis (both in absolute dollars and as a percent of GDP).

In the past, Former Fed Chair Ben Bernanke argued that Quantitative Easing ("printing" money to buy bonds) would stimulate the economy by increasing stock values, making people feel wealthier, so they’d spend more money. This policy didn't work because QE creates nominal, not real, wealth. Unfortunately, the recent wealth destruction was real and will have a significantly negative impact on the economy.

This year, $15.5 trillion of wealth (equal to 60% of GDP) was destroyed. This amount does not include the nearly $2 trillion lost in the Cryptocurrency market. 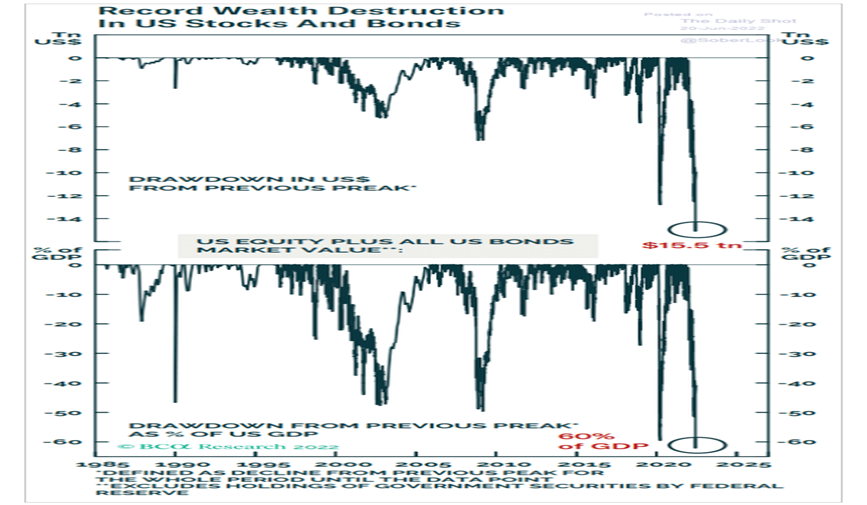 In addition to the economic slowdown and probable recession, we believe that earnings estimates are unlikely because profit margins are at a record high and poised to regress to an average level as the economy slows. Currently, profits as a percent of GDP are 11.2%, which is two standard deviations above its 75-year average of 7.1%. 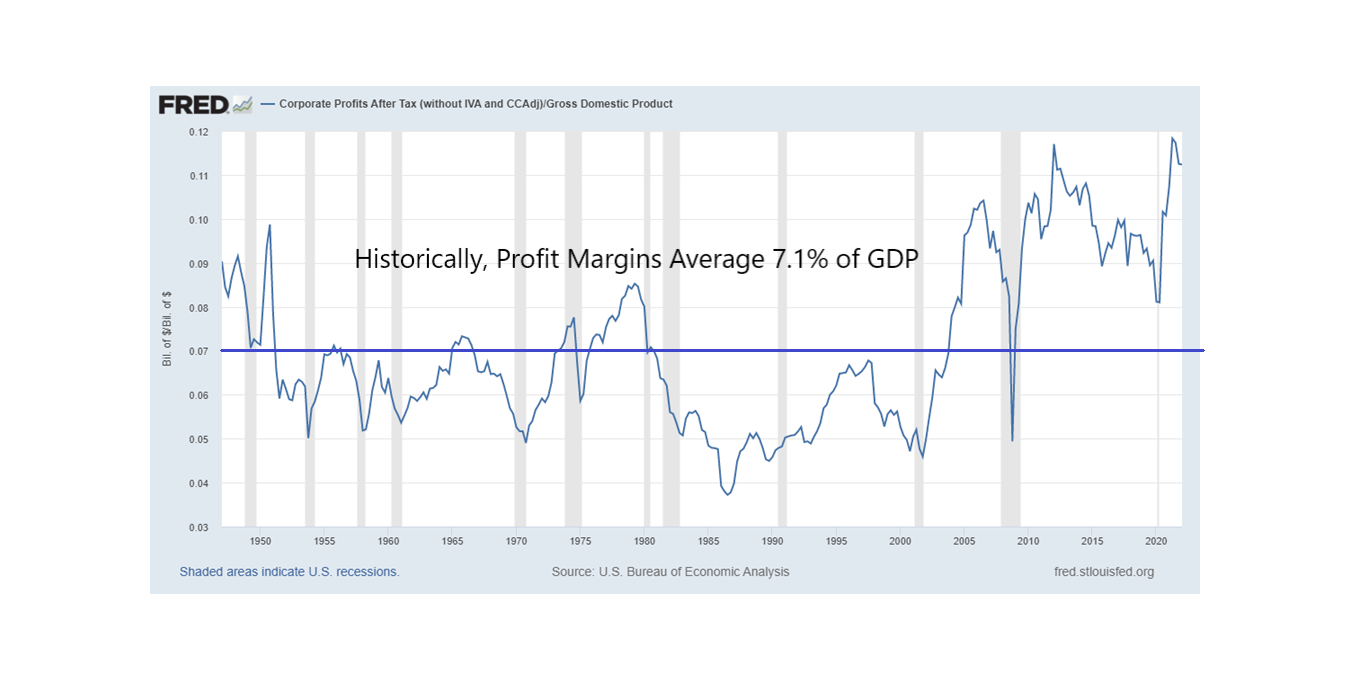 We are in a bear market, and in our view, a recession is likely. We believe it's prudent to look at previous bear markets to understand the magnitude and duration of the current decline. According to BofA Research, the average bear market during an NBER recession is 32.5% over 10 to 13 months.

If history is an accurate guide, the S&P 500 will decline to 3250 by this fall. Typically, during Mid-term election years, stocks decline into the fall and then rally on average 17.6% off their fourth-quarter low. If inflation is tamed, oil prices recede, and the Fed indicates it will move to the sidelines, we believe this scenario is likely. If oil does not decrease, the credit cycle could turn down, and a mild recession could become a financial crisis.

As the Fed tightens financial conditions and the credit cycle turns down, we expect the S&P 500 to fall to 3200. A decline to 3200 would retrace 61.8% of the previous bull market and be in line with the average bear market decline of 34%. The S&P would sell at 15.4 times 2021 peak earnings at this level. 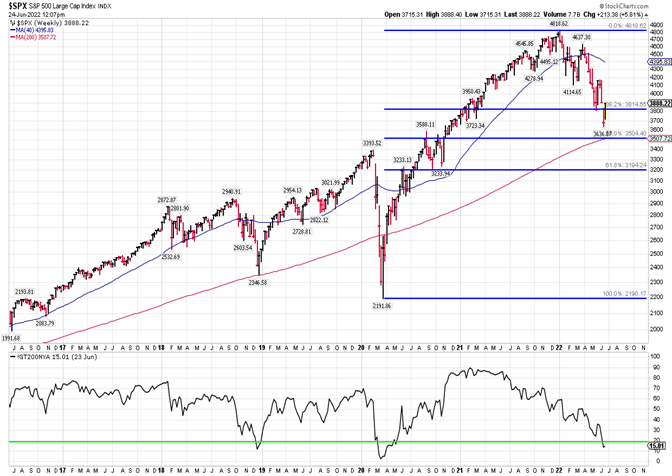 The benchmark for our model portfolio is the Traditional Blend — 60% equity, 40% bonds. Our goal is to outperform the benchmark with less risk. To outperform, our investment portfolio is diversified and economically balanced. We eliminate laggards and tilt the portfolio toward our location in the business cycle. Finally, to manage risk, we volatility-weight our positions and set a volatilty target equal to our benchmark's historc risk level. When volatility increases, our asset allocation dynamically reduces our equity risk exposure.

Our portfolio remains positioned for a Stagflationary economic environment (slowing growth and elevated inflation). We remain invested in the value and defensive sectors of the market, which should perform well as growth slows. Also, we are invested in gold, commodities, and short-term TIPS (U.S. Treasury Inflation-Protected Securities), which perform well during periods of elevated inflation.

History shows that most Fed tightening cycles lead to recession, especially when inflation exceeds 5%. Currently, the economy is slowing due to the inflation burden, rising interest rates, falling real wages (wage growth minus inflation), and the Fed (finally) making aggressive moves to combat inflation. Since the Fed raised interest rates by 0.75% last week, the oil price plunged 12.6%, and energy stocks dropped by 14.6% in six days. If the price of oil enters a bear market, it will be an important indication the period of stagflation is over, and we are entering a recessionary environment.

In sum, we are in a bear market, and volatility remains elevated. To preserve capital, we are underweight equities, overweight the safe haves (gold and long-term Treasury bonds), and maintain a large cash balance. We will continue to focus on preserving capital until inflation subsides, the economy stabilizes, and the market offers a better risk-reward

In sum, stocks are in a bear market, and volatility remains elevated. We remain focused on preserving capital in this risky and uncertain environment and remain underweight equities and overweight commodities and gold relative to our benchmark. We maintain a large cash balance, which reduces the portfolio's risk level and gives us the buying power to make future investments at better prices.

Our portfolio's risk level (annualized volatility) is 16.4%, which is less than our 60/40 benchmark. 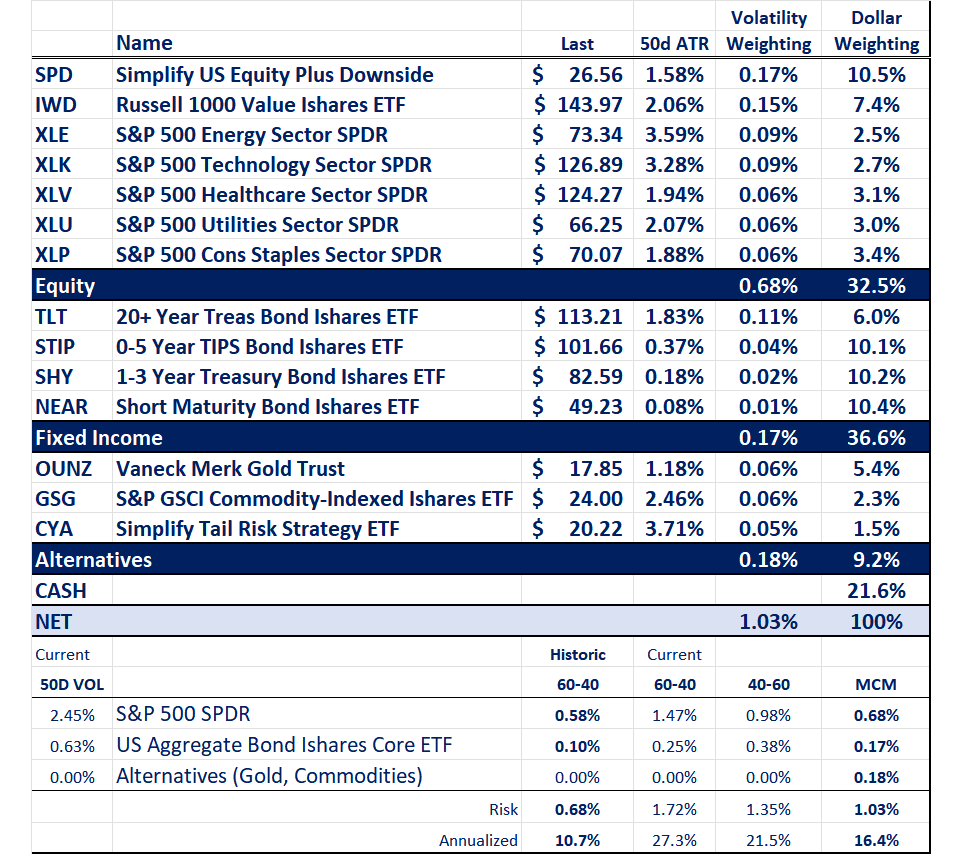