After a difficult Q1, the selloff in the financial markets accelerated in April because of the extended war in Ukraine, the supply chain issues related to the lockdowns in China, and the Fed's "promise" to raise interest rates quickly to curb inflation. Additionally, stocks suffered in April as disappointing earnings from Netflix and Amazon indicated that surging inflation could be hurting consumers.

The S&P 500 declined by 8.8% in April, while the small-cap Russell 2000 fell 9.9%. The NASDAQ Composite plunged by 13.3% in April, its worst month since October 2008. The foreign markets also faltered --  the MSCI EAFE index of international stocks and the MSCI Emerging market index declined by 6.7% and 6.1%, respectively.

This year has been challenging for investors with balanced portfolios like the Traditional Blend (60% stock, 40% bond). Stocks and bonds are usually negatively correlated, so bonds rise and act as a ballast for balanced portfolios when stocks fall. Unfortunately, inflation has temporarily caused stocks and bonds to decline together. Only commodities and gold have provided a positive return this year.

Surging interest rates and fear of shortages due to the Ukraine war and the lockdowns in China led to a very broad selloff in April. Consumer Staples were the only sector of the S&P that had a positive return. The most significant declines were in the sectors with high valuations and the most exposure to the overvalued mega-cap stocks: Communications (14.1%), and Consumer Discretionary (11.9%), and Technology (10.9%). 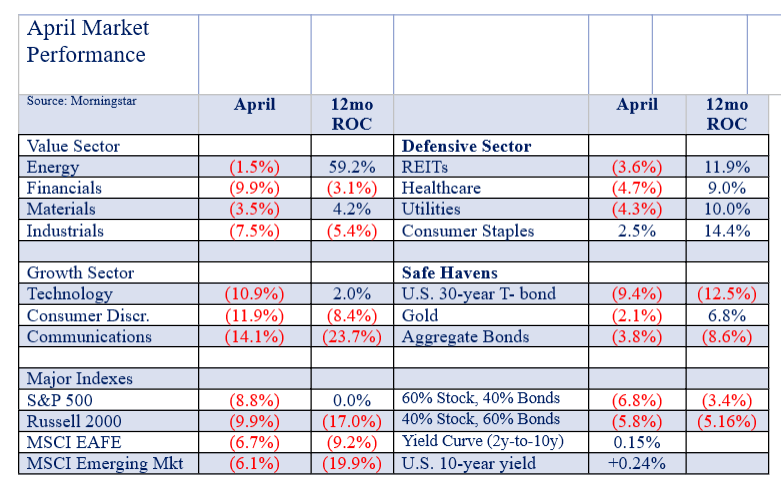 The Federal Reserve and U.S. Government unleashed unprecedented monetary and fiscal stimulus to stabilize the economy during the pandemic. Unfortunately, these policies, coupled with supply chain issues and a reduction in energy production due to underinvestment because of ESG concerns, created financial asset bubbles and drove inflation to a 40-year high.

Last year the Fed claimed that inflation was "transitory," the bond market agreed, and interest rates hardly rose. On December 1st, inflation was 7.1%, yet the 2-year U.S. Treasury note yielded only 0.56%, and the S&P 500 sold at a P/E of 21.5 times 12-month forward earnings.

The Fed's analysis was wrong, and inflation was not transitory. It was primarily driven by their profligate policy of negative real interest rates (short-term interest rates set less than inflation) and their QE program that printed $120 billion each month to buy Treasury and mortgage bonds.

This year inflation continued to accelerate, and it was clear that the Fed would need to act aggressively because it had not even begun tightening monetary policy. Bond investors panicked, and interest rates had one of their sharpest increases in history. The 2-year U.S. Treasury bond increased from 0.73% to 2.74% in four months.

The 2-year U.S. Treasury bond increased by 2.0% in four months as investors realized the Fed was behind the curve fighting inflation.

The bond market is on pace to have its worst year on record, and the sharp increase in interest rates has led to a broad-based bear market for stocks.

Year to date market performance through May 18th:

Interest rates and earnings are the main drivers of stock prices. Since companies are worth the present value of their future cash flows when interest rates rise, the company's value declines. This year's sharp increase in interest rates created a bear market by driving stock valuations from overvalued to fairly valued. As the table above shows, the most significant year-to-date declines occurred in the market sectors with the highest valuations.

Over the past 20-years, inflation averaged 2.1%, the 10-year U.S. Treasury bond yielded 2.94%, and the S&P 500 was valued at 15.5 times 12-month forward earnings. Today, inflation is 8.3%, the 10-year U.S. Treasury bond yields 2.88%, and stocks sell at 16.6 times forward earnings. Despite the bear market in stocks and bonds, valuations still appear rich considering the economic uncertainty and geopolitical risk.

The Fed's monetary mistakes led to financial asset bubbles and inflation at a forty-year high. The Fed's preliminary actions to fight inflation are deflating the asset bubbles they created. Despite a severe bear market and economic uncertainty, stocks are not yet undervalued.

The sharp rise in interest rates led to a contraction in market valuation (overvalued to fairly valued), which drove the first leg of the bear market. To fight inflation, the Fed has indicated that it will aggressively raise interest rates to a neutral level of around 3% by early next year. The Fed is raising interest rates and tightening financial conditions to slow economic growth and reduce inflation.

While the Fed is hopeful that its actions to reduce inflation will not lead to a recession, history shows that a "soft-landing" is unlikely since most Fed tightening cycles led to recession. Its most successful "soft landing" occurred during the 1994 tightening cycle.

The current relationship between short-term interest rates and inflation is nearly the mirror opposite of 1994. When the Fed first hiked interest rates to 0.50% on March 16th,  inflation was 7.9%, and real rates were negative 7.4%. We believe a "soft-landing" is unlikely because the Fed failed to act preemptively, and inflation surged to a level that historically led to recession.

Inflation has been above 5 percent for nearly a year. Historically, only a recession tames inflation once it reaches this level. 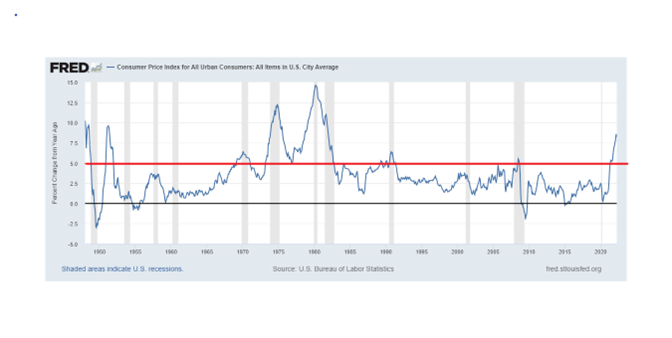 The Fed will raise interest rates and sell bonds to shrink its bloated balance sheet to fight inflation. These actions, by design, will slow economic growth and, as history shows, probably lead to a recession. Despite the Fed's explicit statement that it will attempt to slow the economy, Wall Street analysts are forecasting robust earnings growth of 10.1% this year. Although interest rates have risen, and labor, transportation, and commodity costs have surged, analysts have not reduced their earnings expectations for 2022.

We believe that inflation, higher interest rates, and plunging consumer confidence will adversely impact the economy and corporate profits. Also, the trillions of dollars lost in the stock, bond, and crypto markets over the past six months are creating a negative wealth effect on the economy that is difficult to measure.

We believe the next leg in the bear market will be driven by analysts reducing their earning expectations and stocks discounting a profit recession. This week, analysts were shocked to learn that Wal-Mart and Target reported disappointing earnings due to inflation's negative impact on their profit margins. Both stocks had their most significant single-day drops since the 1987 crash. What will happen to average operators if Wal Mart's profitability (the best operator in the consumer space) was adversely impacted by inflation?

Despite surging costs and higher interest rates, Wall Street expects 10.1% profit growth this year. We believe the analysts are wrong and profits will significantly disappoint. 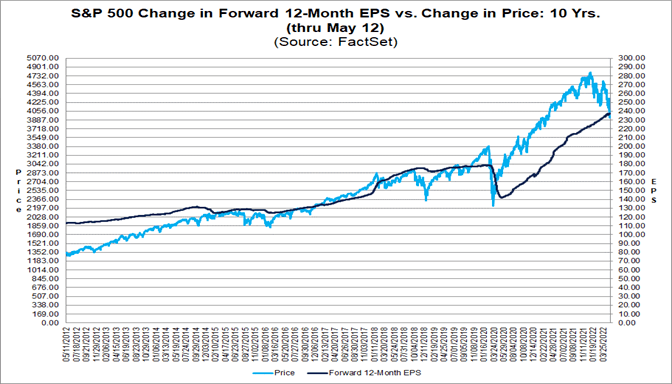 We estimate that the second leg of the bear market will drive the S&P 500 to 3200 by this fall, which is a 34% peak-to-trough decline and in line with the average bear market since WWII. Additionally, at 3200, the S&P 500 would sell at about 16 times peak GAAP earnings and retrace 61.8% of the bull market from the Pandemic low.

As the Fed tightens financial conditions and the credit cycle turns down, we expect the S&P 500 to fall to 3200. A decline to 3200 would retrace 61.8% of the previous bull market and be in line with the average bear market decline of 34%. 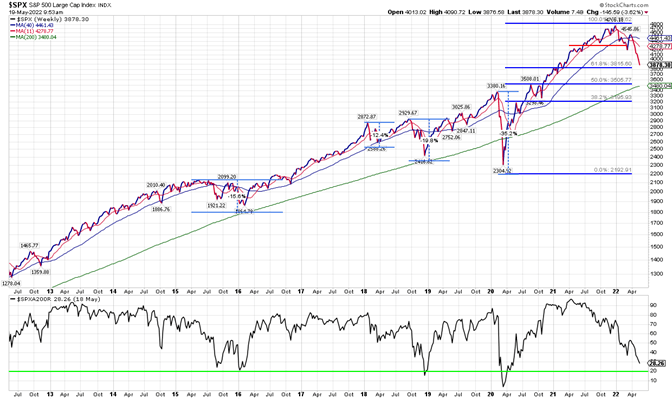 Stocks are in a bear market because inflation and the sharp increase in interest rates caused valuation levels to fall from overvalued to fairly valued. Currently, inflation is 8.3%, and the Fed has indicated that they will raise interest rates and tighten financial conditions to slow growth and reduce inflation. Although most Fed tightening cycles led to a recession, Wall Street is forecasting robust 10.1% earnings growth. Recent earnings reports from Amazon, Walmart, Target, and Cisco indicate that 10% growth is unlikely.

Higher interest rates and declining valuations drove the first leg of the bear market. The second leg of the bear market will be driven by declining earnings expectations caused by a declining credit cycle and a slowing economy. In this high-risk environment, we are focused on preserving capital until there is less uncertainty and the market offers a favorable risk-reward.

The benchmark for our model portfolio is the Traditional Blend — 60% equity, 40% bonds. Our goal is to outperform the benchmark with less risk. To outperform, our investment portfolio is diversified and economically balanced. We eliminate laggards and tilt the portfolio toward our location in the business cycle. Finally, to manage risk, we volatility-weight our positions and set a volatilty target equal to our benchmark's historc risk level. When volatility increases, our asset allocation dynamically reduces our equity risk exposure.

Last year, the Fed failed to remove its emergency monetary measures (used to stabilize the economy during the pandemic) because it believed inflation was "transitory." We thought their monetary mistake would lead to accelerating economic growth and an inflationary surge, so we eliminated interest-sensitive securities and added value and energy stocks, commodities, gold, and TIPs (U.S. Treasury Inflation-Protected Securities) to perform well in a reflationary period (accelerating growth and inflation).

We believe the economic growth rate has peaked (Q1 GDP was negative) due to the inflation burden, higher interest rates, and low consumer confidence, yet the Fed is embarking on its most aggressive tightening cycle in 40 years. History shows that most Fed tightening cycles led to recession, especially when the Fed waited for inflation to surge before acting.

Our portfolio is positioned for a stagflationary economic environment (slowing growth and elevated inflation). To perform well in this economic environment, we have invested in the market's defensive (not economically sensitive) sectors – utilities, consumer staples, and healthcare. Also, we added initial positions in the U.S. Treasury bonds that should act as a safe haven in a period of slowing economic growth. Our investments in energy stocks, commodities, gold, and TIPS should continue to perform well with elevated inflation.

In this high-risk environment, we will continue to focus on preserving capital until inflation subsides and the market offers a better risk-reward. To manage risk, we build a diversified and economically balanced portfolio to perform well in all economic environments (growth, inflation, recession). Next, we determine which economic environment we are in, and we tilt the portfolio to investments that perform best in that environment.

In sum, stocks are in a bear market, and volatility remains elevated. We remain focused on preserving capital in this risky and uncertain environment and remain underweight equities and overweight commodities and gold relative to our benchmark. We maintain a large cash balance, which reduces the portfolio's risk level and gives us the buying power to make future investments at better prices.

Our portfolio's risk level (annualized volatility) is 15.6%, which is less than our 60/40 benchmark. 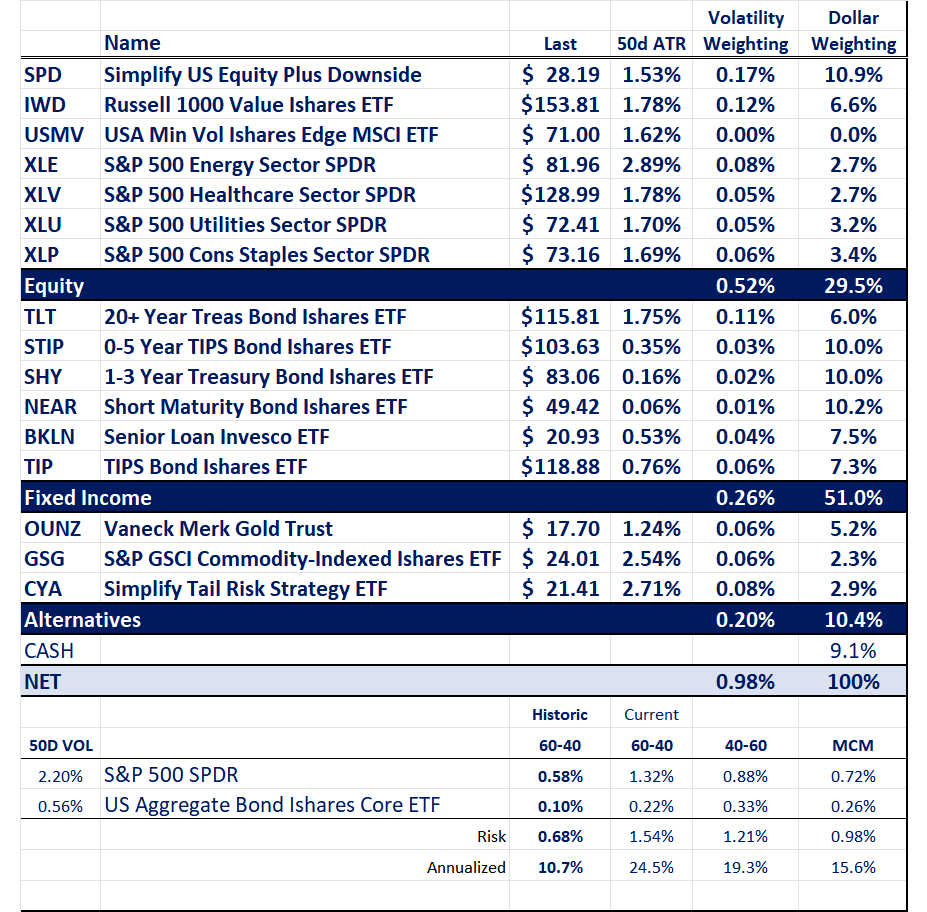