The Election is Over and Vaccines are on the Horizon -- Is it Time to Buy Stocks?

After declining by 4.1% in September, the S&P 500 fell by 2.8% during October. In addition to the uncertainty over the election, investors were concerned by the surge in the Coronavirus cases and Congress's failure to pass a fiscal stimulus bill. In this "risk-off" environment, the safe havens performed poorly– the long-term U.S. Treasury bond and gold declined by 3.5% and 0.5%, respectively.

While uncertainty drove stocks lower, the corporate fundamentals continue to improve. According to FactSet, 92% of S&P 500 companies have reported Q3 earnings, which declined by only 7.1% from a year ago.  Additionally, corporate revenues were 2.5% better than analysts' expectations, which was the largest revenue surprise since 2008.  Unfortunately, valuations remain stretched. The forward 12-month P/E is 21.6, which is 38.5% above its 10-year average of 15.6.

In November, stocks surged as the election ended, and Pfizer and Moderna announced that their vaccine candidates were more than 90% effective in preventing COVID-19. Both vaccines showed significant efficacy. If they are proven safe, the FDA may approve them for emergency-use authorization, which could provide vaccines to emergency workers and high-risk people by the end of this month. Pfizer stated that 25 million people could be vaccinated this year, while Moderna could vaccinate an additional 10 million. Both firms expect that their respective vaccines will be widely available this spring.

In our view, this excellent vaccine news is offset in the short-term by the record surge in COVID-19 new cases and hospitalizations. We expect that the market will remain volatile as the vaccine euphoria wears off and investors focus on the virus's spread this winter and its economic impact.

Although we continue to believe that the S&P 500 offers a poor risk-reward, we see an opportunity in the "beaten up" economically-sensitive value stocks. To combat the pandemic, the Fed printed more than $3 trillion to buy financial assets, which, in our view, induced another financial bubble.

While the Fed's action drove the S&P 500 up 63.6% in five months, most of the S&P 500's strength was due to the mega-technology stocks' powerful performance (Apple, Amazon, Microsoft, Facebook, and Google), which represent more than 23% of the S&P 500.  While the mega-tech stocks surged in 2020, the economically sensitive stocks (energy, financials, and industrials) performed poorly (see year-to-date table below).

We expect that growth will surge early next spring, as the vaccine becomes widely available, the economy reopens, and pent-up demand is released. We believe that the economically sensitive sectors will perform very well in this environment, while the overvalued mega-tech stocks will struggle.

Through the end of October, the market's breadth remained poor. Technology, Consumer Discretionary, and Communication Service, which are dominated by the mega-cap stocks (Facebook, Apple, Amazon, Microsoft, and Google), have had a strong year while most of the other sectors declined this year.  Next year, as economic growth accelerates, we expect the sector performance to mean revert – i.e., the weak sectors (energy, financial, industrials) to perform well, while the overvalued, over-loved tech sector underperforms.

We continue to believe that the S&P 500 offers a poor risk-reward. To combat the pandemic's economic consequences, the Fed reduced interest rates to 0% and printed $3 trillion to purchase financial assets. The Fed's action drove the S&P 500 to a record valuation and induced an asset bubble (see chart below).

As discussed last month, in 2001, Warren Buffet told Fortune magazine that the Market Cap to GDP valuation measure is "probably the best single measure of where valuations stand at any given moment." The U.S. stock market's current market value is $37.4 trillion, which is a record 177% of GDP.  Historically, the market cap is equal to 65% of GDP, so stocks are more than 60% overvalued based on this valuation measure.

While we believe that the S&P 500 is overvalued and offers a poor risk-reward, the market appears bifurcated, and we see good opportunities in the cyclical sectors of the market. The uncertainty over the virus and its economic impact led investors to sell the cyclical sectors of the market and purchase the mega-cap technology stocks (Apple, Microsoft, Amazon, Google, and Facebook) because they are less economically sensitive, and their near-monopoly status made them safe-havens. These companies' fundamentals prospered as the economy shut down, and many people worked from home. This "flight to quality" and passive investing drove the bulk of the Fed's massive $3 trillion liquidity injection into only a handful of stocks (see table below).

Although we expect the market to remain volatile as the virus surges this winter and the economy slows, the vaccines provide a light at the end of the tunnel. Economic growth is poised to surge early next spring, as the vaccine becomes widely available, the economy reopens, and pent-up demand is released. As the economy reflates, we expect investors to rotate out of the "safe-haven" mega-tech stocks and into the market's cyclical sectors (financials, industrials, and energy).

The next six months may be similar to early 2000. The Fed was concerned with Y2K and flooded the system with liquidity, which resulted in a technology bubble. Once the threat passed, the Fed tightened, and the bubble burst. Fundamentally, many technology companies thrived as companies prepared for Y2K. Still, once the danger was over, business declined, and it became apparent that the Y2K scare only pulled future demand forward. As the economy opens next year, the mega-tech companies' fundamentals may suffer the same fate, i.e., today's fundamental surge may have only pulled future demand forward.

We expect that the S&P 500 will underperform because of its 22% weighting to mega-cap stocks.  Like early 2000, we believe the cyclical sectors and small-cap stocks are poised to outperform as the economy reflates next year (see chart below). 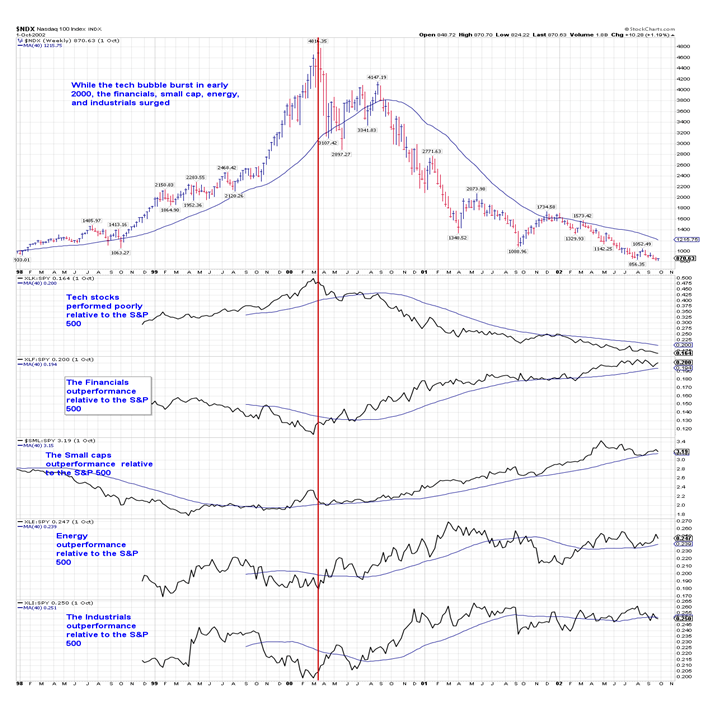 The industry is consolidating, and recently there have been four large mergers, which should lead to greater long-term profitability. Today, the energy sector remains highly leveraged to economic growth, and it provides a good inflation hedge, which may be useful given the large budget deficit and the Fed's profligate monetary policies.

The benchmark for our model portfolio is the Traditional Blend — 60% equity, 40% bonds. Our goal is to outperform the benchmark with less risk. To outperform, our investment universe is diversified and economically balanced. We eliminate laggards and tilt the portfolio toward our location in the business cycle. Finally, we risk-weight our positions to manage volatility.

Recently, we invested in the S&P Midcap 400 and the MSCI Value factor.  Also, we added international exposure (Japan and Emerging Markets) and a small position in the beaten-up energy sector.  To benefit from the economy's reflation, we purchased an initial position, the GSCI Commodity Index

Since we believe that growth will surge early next spring, as the vaccine becomes widely available, the economy reopens, and pent-up demand is released, we plan to reposition the portfolio opportunistically. We will gradually reduce our exposure to the market's defensive sectors and increase our investment in economically sensitive sectors. We will also invest in international stocks, which are cheap and should benefit from a weak dollar.

When the virus plateaus and the economic risks abate, we will reduce the duration of our bond position, and we will increase our Treasury Inflation-Protected Securities (TIPS) position, which should perform well in a period of rising inflation.

We expect the market will remain volatile as the virus surges this winter. We will gradually reposition our defensive portfolio to an economically sensitive portfolio that should outperform as the economy accelerates next year. 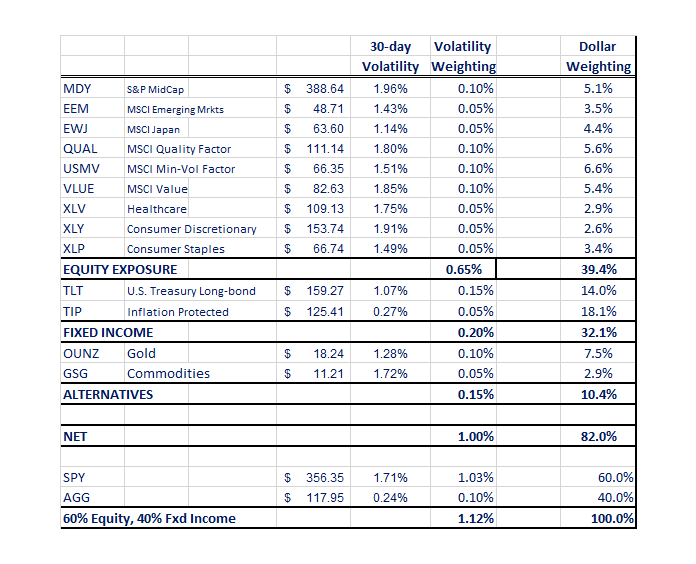 The market surged in early November, as the election ended, and the positive vaccine news was announced. Unfortunately, the virus is surging, and the economy is shutting down again. The market will remain volatile, allowing an excellent opportunity to gradually shift the portfolio from defensive to economically sensitive. The market offers a poor short-term risk-reward because it is very overbought, and investors are euphoric. We expect to increase our tactical risk exposure when investors are fearful, the market is oversold, and breadth improves. Our short-term market outlook is neutral.

While the S&P 500 offers a poor long-term risk-reward, we believe the cyclicals, small-cap, and international stocks offer a favorable risk-reward once the virus plateaus and the economy reopens. After the virus plateaus, we expect a large rotation out of the mega-technology stocks that benefitted from the pandemic into the market's value sectors – i.e., energy, industrial, materials, and financials. We see a significant opportunity in investing in these value sectors of the market while avoiding the mega-tech and the S&P 500. While we expect to profit from the reflationary rotation into the cyclicals, we remained concerned longer-term about the record corporate debt level. Our Strategic Asset Allocation is underweight equities relative to our benchmark.

Financial repression (negative real rates and printing money to buy financial assets), a flight to quality, and passive investing created a bubble in the mega-tech stocks. Like early 2000, we think the cyclicals will surge, and the S&P 500 will languish as investors exit the overvalued and over-owned mega-tech tech stocks. While a vaccine should be readily available by spring, we believe stocks remain at risk as the virus surges and the economy shutters.

We strongly believe that the key to growing wealth and compounding at an optimal rate is to avoid significant drawdowns, which typically appear in high-risk periods similar to today. We will continue to focus on preserving capital during this volatile and uncertain time. Protecting wealth will ensure that we will have significant cash available to take advantage of the substantial opportunities when the recession is over, the virus is contained, and stocks offer a favorable risk-reward.

If there are any questions or comments, please do not hesitate to contact me directly