Last week, stocks rallied due to better than expected economic data and President Trump’s statement that we are in the “final throes” of reaching a trade deal with China.

While the stock market rallied, the bond market was quiet in a holiday-shortened week -- the U.S. 10-year Treasury bond yield and the yield curve (3-month minus 10-year U.S. Treasury bond) were flat. Also, despite the “risk-on” environment, the safe havens performed well -- the U.S. Treasury long-bond (TLT) rallied by 0.37% last week, and gold rose by 0.62%.

Trade Negotiations with China Continue to be the Market’s Most Important Driver.

On Tuesday, Congress passed The Hong Kong Human Rights and Democracy Act to help protect the human rights of Hong Kong's citizens. The Chinese government vowed to retaliate if the President signed the legislation. While the Senate was passing the bill, top negotiators from the U.S. and China met by phone to discuss the remaining issues of the “phase one” trade deal that was announced on October 11th.  That afternoon, stocks jumped when President Trump told reporters that "we're in the final throes of a very important deal, I guess you could say one of the most important deals in trade ever. It's going very well, but at the same time we want to see it go well in Hong Kong."

On October 11th, President Trump and Chinese Vice Premier Liu He met in Washington to announce that they reached a preliminary trade deal. President Trump said, "We've come to a deal, pretty much, subject to getting it written." Since the deal was announced, nearly eight weeks ago, the agreement has not been written or signed, yet the S&P 500 has rallied by more than 7% on the promise by both sides that a deal was imminent.  For nearly two months, stocks have reacted positively to each assurance that a trade deal was close, and in our view, stocks are fully discounting that a “phase one” agreement will be signed.

In fact, most wall street strategists believed that the proposed December 15th tariffs on consumer goods would be eliminated, and the “phase one” deal would be signed early in the new year.

Unfortunately, this weekend, China stated that the existing U.S. tariffs must be rolled back in the first phase of the trade deal, and only eliminating the December 15th tariff increase was not acceptable.

Since the President eliminated the proposed October 15th tariff increase as a sign of good faith, which lead to the “phase one” proposal, it is unlikely that he will roll back existing tariffs.  If he did, he would be criticized for capitulating to the Chinese and achieving very little during the 15-month trade war. Also, he has indicated he will implement the December tariffs if there is no progress with the Chinese.

Stocks have rallied for nearly two months, on the expectation that the trade war was on pause and a preliminary phase one agreement was imminent. It appears that the December 15th tariff will act as a deadline for the phase one deal. If the Chinese demand the U.S. rolls back the tariffs, it is likely the U.S. will instead implement another round of tariffs, and any escalation in the trade war is a significant risk for the stock market and the economy.

The Bond Market is Not Confirming an Economic Recovery

Since the October 11th trade deal with China was announced, the S&P 500 has rallied by 7%. Although the S&P 500 broke out to to an all-time high, the 10-year U.S. Treasury bond has remained in a trading range between 1.50% and 1.95%. While equity investors drove stocks higher on the expectation of an economic acceleration, bond investors seem less optimistic. Typically, in periods of accelerating growth, stocks and bond yields move higher. When divergence like this occur, it is often a sign of increased equity risk. 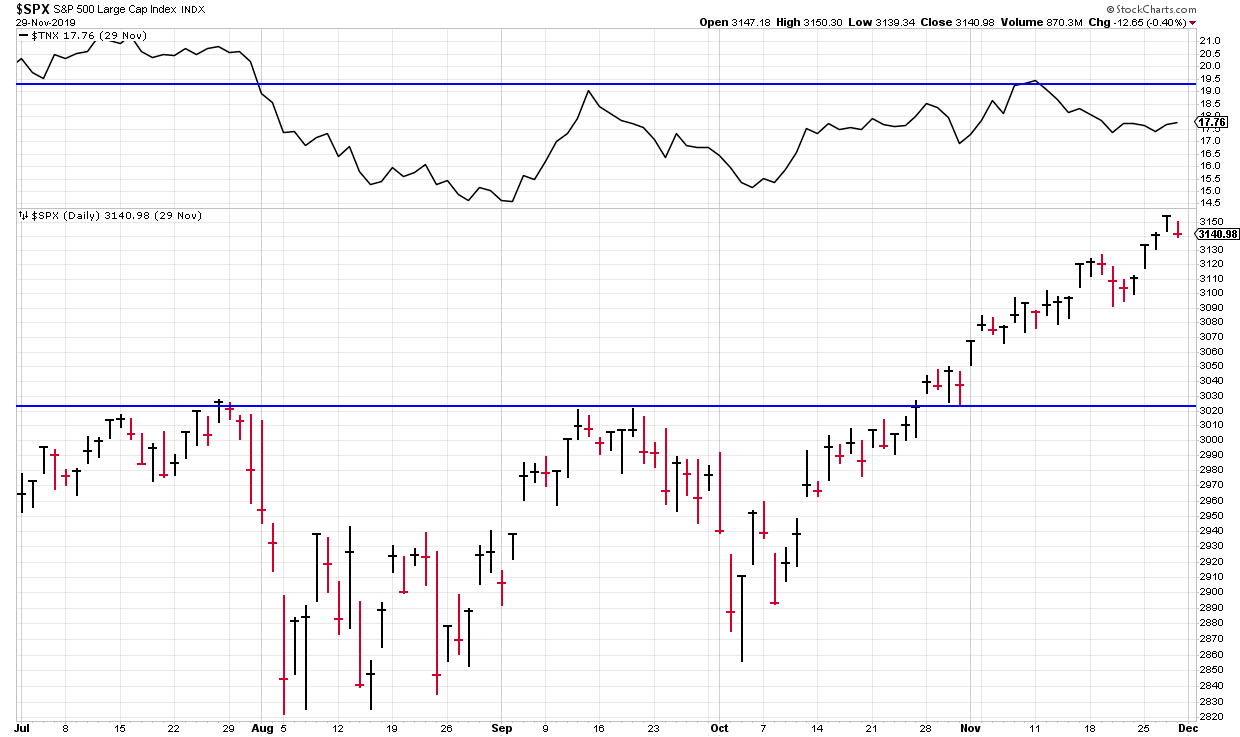 In the short-term (three months): Currently, we are in the strongest three-month period of the year (November through January). We expect that the favorable seasonality and the dovish Fed (three rate cuts since July and printing $60 billion each month to buy financial assets) should drive stocks higher into the new year. From there, an acceleration in the fundamentals will be necessary to fuel further gains. While we expect the market to move higher over the next few months, we believe that the stock market has a poor short-term risk-reward – stocks are very overbought, investors are too optimistic, and market breadth is deteriorating. Uncertainty over the trade deal should increase market volatility and may lead to a short-term correction. We expect to increase our market exposure when the market is oversold, investors are pessimistic, and the market’s breadth is improving.

In the long-term (more than four years): ​​​​​we continue to believe that the stock market offers a poor long-term risk-reward. Central bank liquidity and not economic fundamentals drove stocks far from their intrinsic value. The market is priced for perfection, and we believe that earnings are poised to disappoint as rising wages and a strong dollar lead to declining profit margins. Also, while many investors think that the Fed successfully managed an economic soft landing, we are concerned that since interest rates are already low, the Fed’s brief easing cycle will have a muted impact on economic growth.