This week, Fed Chairman Powell told Congress, “We are closely monitoring the emergence of the coronavirus, which could lead to disruptions in China that spill over to the rest of the global economy.” Powell stated that it was “too early to say” how the virus would impact the resilient U.S. economy.  The hope that the virus was contained and the belief that the Fed was prepared to provide more monetary accommodation, if necessary, drove the markets to an all-time high this week.

For the week, the S&P 500 rallied by 1.6%, while the tech-heavy Nasdaq 100 and the small-cap Russell 2000 increased by 2.4% and 1.8%, respectively. The MSCI EAFE Index (international ex-US and Canada) was down slightly (0.1%), and the MSCI Emerging Markets rose by 1.9%. After a sharp correction, the economically sensitive commodities rallied this week – oil jumped by 3.4% and copper bounced 1.8%.

Additionally, the yield curve continued to flatten this week, which indicates slower economic growth. The 3-month to 10-year U.S. Treasury yield curve dropped by  2bps and closed the week at 0.01%. The yield curve is an excellent indicator of future economic growth and inflation. Typically, when the yield curve remains inverted for a month, it becomes likely that a recession will occur in the next eighteen months.

According to Factset, 77% of S&P 500 companies have reported Q4 earnings, and the blended earnings increase is 0.9% on revenue growth of 3.6%. If earnings increased in the fourth quarter, as expected, it would be the first quarter of positive growth since Q4 of 2018.

While stocks are very expensive, we are concerned that the current earnings estimate is too high. Analysts continue to believe that profits will grow by 8.0% on revenue growth of 5.2% in 2020. In our view, the tight labor market and higher costs coupled with a slowing economy will lead to falling profit margins and disappointing profit growth.

Before the outbreak fears hit the stock market, the S&P 500 rallied by 16.8% from its October low to its January 23rd high. The Fed’s aggressive monetary actions (printing money to buy $60 billion of U.S. Treasury bills each month) and the belief that the signing of the “phase-one” trade deal with China would lead to an acceleration in economic growth fueled the stock market’s rally. In our view, investors became too optimistic, and the stock market was very overbought, and due for a pullback when news of the outbreak broke.

In late January, the S&P 500 dropped by 3.7% on fears of the coronavirus, and within four days, it rallied back to a new all-time high. We are surprised by the stock market’s resilience, given the uncertainty over whether the virus is contained and the extent and duration of the economic damage in China. Despite the S&P 500’s new high, U.S. Treasury bond yields remain depressed and the yield curve has inverted, which typically indicates the high probability of a recession in the next 12-months.

While the S&P 500 closed at an all-time high this week, which pundits believe is a sign that the economy and corporate profits are not at risk, the bond and commodity markets tell a different story.  Since the S&P 500’s January 23rd peak:

Historically, significant divergences between the performance of stocks and bonds indicate a high-risk environment, which typically leads to a stock market correction. Also, we are concerned that the yield curve began flattening -- which indicated economic weakness -- before the coronavirus outbreak (see chart of the week). We will continue to watch this divergence closely and hope that bond yields recover, which will indicate the economy isn’t at risk.

In our view central banks have distorted the financial markets. Currently, stocks view the bad news as good news -- believing the Fed will cut interest rates and print more money to buy bonds -- while bonds and commodities see bad news as bad news. Unfortunately, bad news is good news for investors until it isn’t -- and since interest rates are already low and the Fed is currently buying $60 billion of U.S. Treasurys each month, the Fed has limited tools to fight an economic downturn, if one were to occur.

​The yield curve flattened before the coronavirus fears hit the markets?

The bond and commodity markets diverged from stock prices before fears of the coronavirus affected the financial markets. This flattening yield curve indicates that economic growth was slowing before the outbreaks negative impact on the economy. Investors drove stocks to an all-time high on the belief that the economy was poised to accelerate and corporate earnings would grow at 10% in 2020.

While no one knows if the virus is contained, or its magnitude and duration of its impact on the economy, the divergence between stocks and bonds is clear. In our view, stocks offer a poor short-term risk-reward and it is prudent for investors to reduce their risk exposure – just in case the bond market has it right 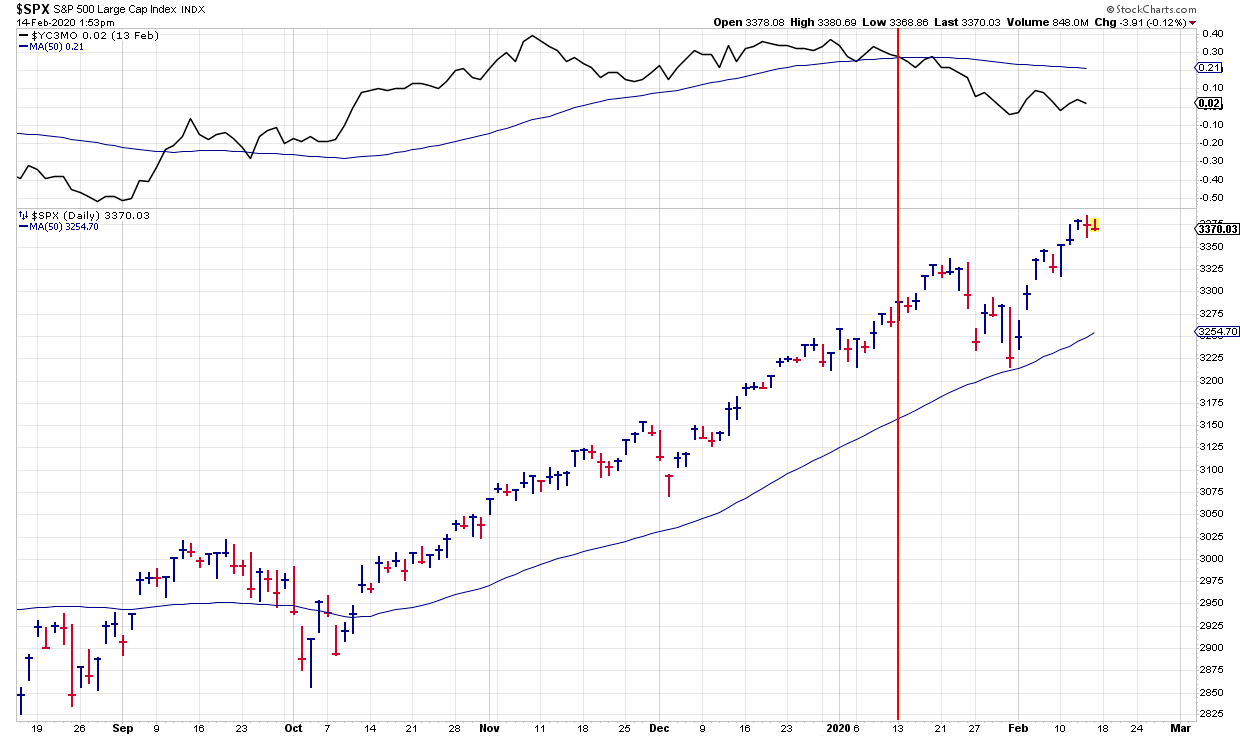 In the short-term (three-months): stocks offer a poor risk-reward. Stocks are overbought, investors are too optimistic, and market breadth is weak. We will patiently wait for an oversold market, pessimistic sentiment, and improving market breadth before adding to our risk exposure. Our Tactical Asset Allocation is Neutral and we would turn negative if the S&P 500 closes below its January 31st low (SPX 3215).​

In the long-term (more than four years): we continue to believe that the stock market offers a poor risk-reward. Central bank liquidity and not economic fundamentals are driving stocks far from their intrinsic value. We believe the Fed’s aggressive monetary policy, coupled with a $1 trillion budget deficit, is leading to an increased debt burden and larger asset bubbles. China’s growth is slowing, while Japan and Europe are on the brink of a recession. Stocks appear priced for perfection, while the risk of global recession is elevated. Additionally, we believe that earnings are poised to disappoint as rising wages, and an increased corporate debt burden leads to declining profit margins. Our Strategic Asset Allocation is underweight equities relative to our benchmark.