The Federal Reserve and Congress Took Extraordinary Actions to Stop the Financial Panic, But When will the Bear Market End?

On Monday, the S&P 500 fell by 34% over the previous 23 trading days, which was the fastest 30% decline in market history. Market volatility has reached an unprecedented level, and daily price swings are among the largest in history. Last Monday, the S&P 500 dropped by 12%, which was its most significant daily decline since the 1987 crash. On Tuesday, the Dow Jones Industrial Average rallied by 11%, which was its largest one day jump since 1933.

In addition to the necessary economic shutdown due to the Coronavirus, Saudi Arabia's price war with Russia and liquidity problems in the financial markets all contributed to the market crash – i.e., a 34% decline in 23 trading days.

We believe that the Fed's unprecedented actions halted the market crash on Monday. The Fed is on pace to buy $1 trillion of Treasury and mortgage securities in a two week period to support the financial markets. During the financial crisis of 2008, it took the Fed eight-months to purchase that amount.

While it appears that the Fed stopped the financial panic on Monday, the eleven-year bull market is over, stocks are in a bear market, and we are likely in a recession. Although it is impossible to know the duration or magnitude of the virus and its economic impact, we studied previous market crashes and bear markets in an attempt to create a potential roadmap for the financial markets, which should help us better understand the market's risk-reward.

According to Bob Farrell, Merril Lynch's legendary former technician and market strategist, "bear markets tend to have three stages – sharp down, reflexive rebound, and a drawn-out fundamental downtrend." The sharp down panic move is over, and we believe that we are in the reflexive rally.

Given the tremendous uncertainty in today's investing environment, we are reminded of Shakespeare's famous quote, "The fool doth think he is wise, but the wise man knows himself to be a fool." Although we have developed our investment roadmap, we will always default to our first rule of investing -- cut your losses and manage risk.

​In the short-term (three-months): Stocks crashed down 34% in only 23 trading days. Investors are fearful, stocks are historically oversold, and breadth and volatility have positively diverged. Our short-term outlook turned positive on Friday, and we believe that stocks reached a panic low the following Monday.  We expect that stocks will rarlly to retrace 50% of its panic decline (S&P 500 2700) over the near future.

In the long-term (more than four years): stocks are in a bear market, and we continue to believe that the equity market offers a poor long-term risk-reward. Central bank liquidity and not economic fundamentals drove shares far from their intrinsic value. The global economy was vulnerable before the Coronavirus, and now we believe that a worldwide recession is inevitable. Despite the market crash, stocks remain overvalued, corporations have too much debt, and earnings are in a recession. Our Strategic Asset Allocation is underweight equities relative to our benchmark.

As we discussed in our March 9th market letter, structural issues in the financial markets first appeared this fall when there was a lack of dollar liquidity in the overnight lending market (repo market). The Fed had difficulty explaining the liquidity shortage, so they decided to print $60 billion each month to buy U.S. Treasury bills. The Fed's attempt to paper over the liquidity problem led the stock market to explode higher by 18.8% from October low to its February 19th high.

When the Covid-19 virus struck, the markets were priced for perfection. At its February 19th record high, stocks were overbought, and investors were ebullient despite overvaluation, negative earnings growth, and weak market breadth. Also, the stock market began to diverge from the bond and commodity markets, which typically indicated that stocks are vulnerable to a correction. The yield curve and oil stated to decline in January, which signaled a high-risk period for stocks (see chart below). 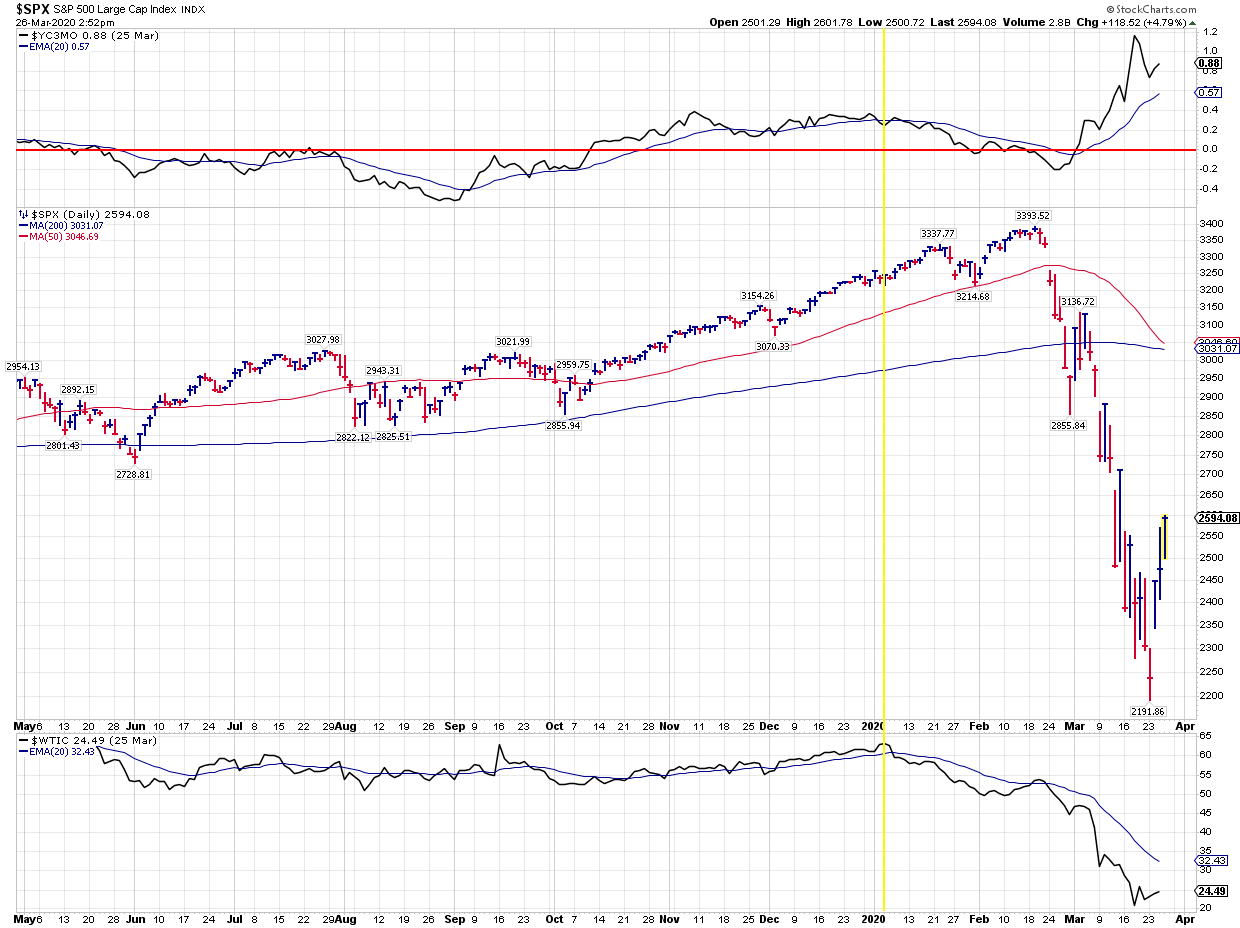 In late February, the market sharply sold-off as investors feared the uncertain impact of the Coronavirus on their health and the economy. While a bear market and recession were inevitable because of the necessary economic shutdown, we think the market crash (the 34% decline in 23 trading days) was caused by structural issues that led to a negative feedback loop of accelerating selling.

Similar to portfolio-insurance, which amplified the selling that led to the 1987 crash, leveraged systematic-investors were increasingly forced to sell assets to reduce their leverage and investment exposure. The more the market declined, the more they need to sell. This vicious cycle of selling spread from equities to nearly every financial market – e.g., funding, credit, mortgage, municipal, Treasury, and commodity.

The massive selling and deleveraging led to illiquid financial markets with few buyers. Despite the Fed's attempts to provide liquidity to stabilize financial markets, the selling continued.  On Monday, the Fed essentially stated they would do whatever it takes to stop the financial panic, and they unleashed an unprecedented monetary policy to halt the market crash.  Their released statement said, "The Federal Reserve is committed to using its full range of tools to support households, businesses and the U.S. economy overall in this challenging time."

In addition to its traditional role as the lender of last resort to the financial sector, the Fed stated they would lend to corporations, Main Street, and even buy bond ETFs for the first time. They have essentially vowed to become a commercial bank.

Also, they said they would launch an open-ended QE program that would print money to buy Treasuries bonds and mortgage securities in whatever quantity is needed.  As mention previously, in two weeks, they will have printed $1 trillion to buy Treasury and mortgage securities. During the 2008 financial crisis, it took them approximately eight months to buy that amount.

In a matter of weeks, the Fed and the government have taken unprecedented measures to stabilize the financial markets and support the economy. Although this massive monetary and fiscal stimulus ended the financial panic, we believe that we are still in a bear market.

We agree with Bob Farrell, that bear markets have three stages --  sharp down, reflexive rebound, and a drawn-out fundamental downtrend." The Fed halted the sharp down panic move and we are in the reflexive rally. We think that the S&P 500 will retrace at least 50% of its decline (S&P 500 around 2700), and then we expect another downturn, which will retest Monday's market low.

Regrettably, it may be a while before the S&P 500 recovers from this recent collapse.  Since 1980 the Dow Jones had had three bear markets greater than 25%, and it took several years for markets to recover:

While we are hopeful that the recession is mild and the bulk of the bear market's damage is behind us, we are concerned that a larger bear market could occur if the recession turns into a debt crisis. Since the last recession, the Fed kept interest rates artificially low to inflate the stock market and encourage lending. In fact, interest rates were below inflation for most of the past ten years (see chart below).

The Fed's profligate policy of financial repression (negative real rates and printing money to buy bonds) led to an unprecedented debt accumulation by corporations and financial institutions over the past decade.  Corporations borrowed to buy back their stock and acquire other companies. This financial engineering -- buying instead of investing and building – led to a record corporate debt burden (see chart below).

Currently, 50% of investment-grade bonds are rated BBB, which is one level above junk. We are concerned that as the economy contracts, debt downgrades, and defaults could turn a mild recession into a debt crisis.  Currently, corporate bond spreads are elevated, but the Fed announced on Monday that they would intervene and directly purchase corporate debt and bond ETFs, which should reduce credit spreads.

If the recession turns into a debt crisis, we believe that the S&P 500 could fall by 47% to 1800, which is near fair value based on the Shiller P/E (a cyclically adjusted P/E), and a 62% retracement of the eleven-year bull market. 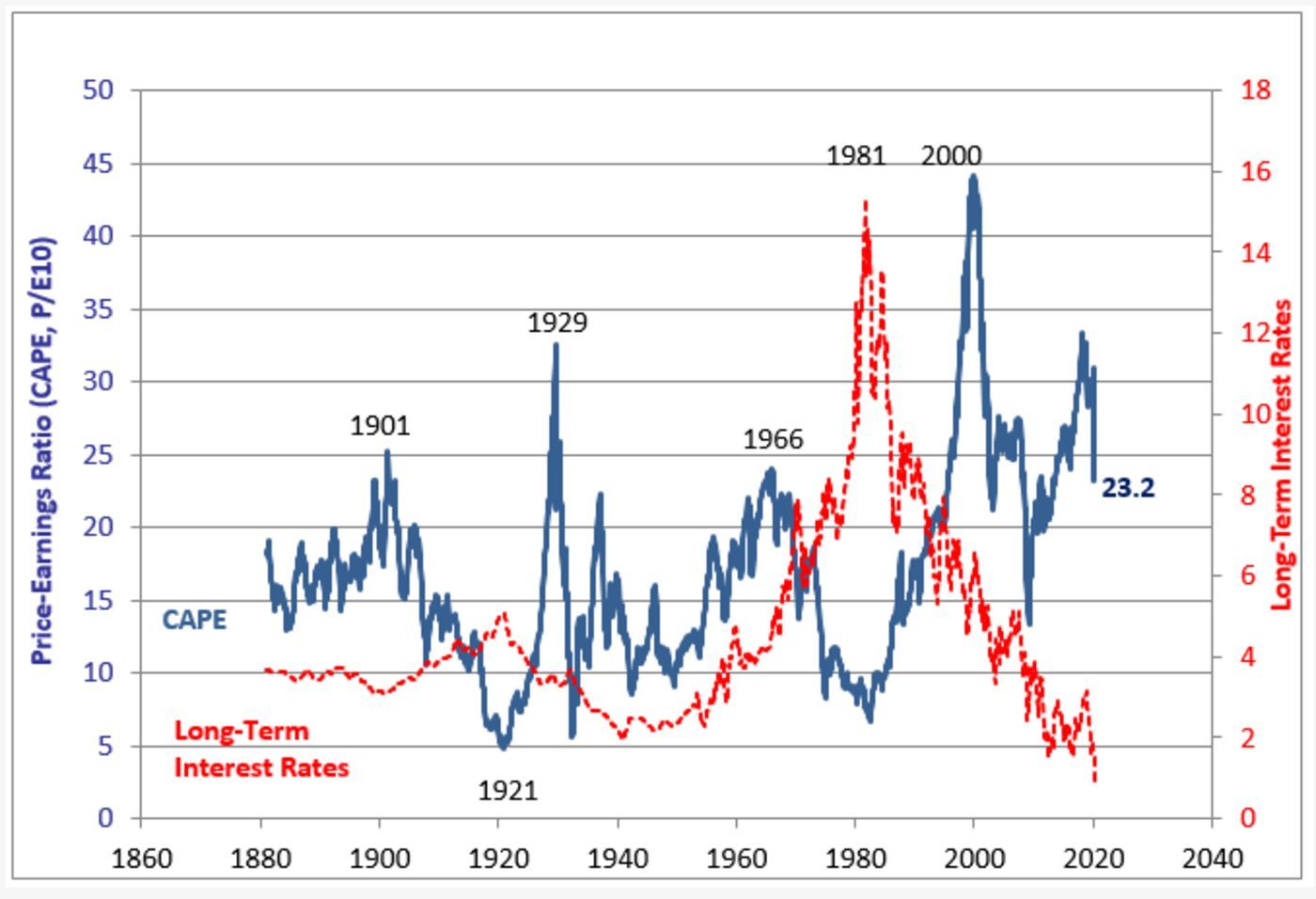 In summary, the Coronavirus was the catalyst that forced institutions to attempt to deleverage at the same time. Since there were few buyers, market volatility increased, which led to a negative feedback loop between rising volatility and declining liquidity.  If the financial markets were truly free and not manipulated by the central banks, speculation and leverage (corporate and financial) would not have reached today's extreme level, and the financial markets could have absorbed the coronavirus shock better.

On Monday, the Fed was forced to intervene in the markets and double-down on their profligate monetary policies that create many of today's problems – i.e., too much debt and speculation. While the Fed has not indicated how long they will intervene in markets, and no one knows the full extent of the unintended consequences, we believe that financial markets will be very different after the Coronavirus crash.

The “Fed Put” and corporate buybacks are two staples of the eleven-year bull market, which we think will have a significantly diminished future impact on stocks. Also, inflation has declined for nearly forty years. We wouldn't be surprised if the unprecedented level of monetary and fiscal policy leads to an unexpected inflation problem in the future.

In this uncertain and unprecedented environment, we believe that investors should focus on preserving capital and playing defense. We believe that the crash is over, and the reflexive rally provides an opportunity for investors that are uncomfortable with the volatility in their portfolio to reduce some risk exposure.