Last week, stocks rallied for the fifth consecutive week, and safe havens plunged due to a better than expected ISM Non-manufacturing report and a statement from China’s Ministry of Commerce that a phase-one trade deal would include the removal of tariffs.  Importantly, on Friday, stocks held their gains despite President Trump refuting China’s announcement.

The S&P 500 rallied by 0.85% to close at an all-time high, while the tech-heavy Nasdaq 100 and the small-cap Russell 2000 increased by 1.14% and 0.62%, respectively, last week.  International stocks also performed well, the MSCI EAFE Index (international ex-US and Canada) and the MSCI Emerging Markets appreciated by 0.53% and 1.06%, respectively.

Trade optimism drove the U.S. 10-year Treasury bond up 0.20% to 1.93%, and the yield curve (3-month minus 10-year U.S. Treasury bond) increased by 0.18%, to close at 0.39%, which is its steepest level since last December. A steepening yield curve typically indicates accelerating economic growth.

The positive trade news and the back-up in interest rates led to a sharp sell-off in the safe havens -- the U.S. Treasury long-bond (TLT) plunged by 4.02% last week, and gold fell by 3.21%.

Early last week, stocks rallied, and bond yields rose after the Chinese announced that negotiations were going well, and both sides agreed to roll back tariffs when phase-one of the trade deal is signed. Unfortunately, on Friday, President Trump disputed the Chinese announcement and said that the U.S. has not agreed to tariff relief during a phase-one agreement.

While the stock market rallied and the safe havens plunged after the Chinese announced that tariffs would be eliminated, the stock market didn’t sell-off on Friday when President Trump denied the agreement. It appears that the markets are imminently expecting a favorable trade agreement.

In our view, the President will “kick the can down the road” by only agreeing to minor concessions, which will disappoint bullish investors. We believe that the stocks market’s all-time high and the unemployment rate’s fifty-year low embolden the President, which makes a comprehensive trade deal less likely. We think that the strong stock market and robust labor market increase the President’s sense of negotiating leverage, which decreases the chance of a substantive trade agreement.

​Third Quarter Reporting Season is Nearly Over, and the Results Were Slightly Better Than Expected

According to Factset, 89% of the companies in the S&P 500 have reported Q3 earnings. Earnings for the third quarter are likely to decline by 2.4%, which is slightly better than the 4.1% decline that was expected on September 30th.

The S&P 500’s earnings have declined for three consecutive quarters, which has not happened since Q2 2016. Analysts expect that Q4 earnings will decrease by 1.1%, which is below their September 30th estimate of 2.3% growth.

In our view, stocks are overvalued, and next year’s earnings estimate appears unrealistic. If the Fed is successful in creating an economic rebound next year, nominal GDP (growth plus inflation) should grow around 4%, which is a good proxy for corporate revenue growth. If revenue growth is about 4%, profit margins must expand, and corporations will need to borrow money to buy back their stock to grow earnings at 9.7%. Unfortunately, we believe that the strong dollar and the tight labor market will lead to declining profit margins and disappointing earnings growth next year.

Historically, the difference between the Conference Board’s present situation survey and the University of Michigan’s current economic conditions survey had indicated when the business cycle was mature, and the risk of recession was elevated. Since the Conference Board focuses on the current level of today’s conditions and the University of Michigan asks how conditions have changed from a year ago, divergences in consumer sentiment have indicated a shift in optimism, which typically leads to a recession.  Since the yield curve is no longer inverted, an improvement in consumer sentiment will be an essential confirmation that a recession is not on the horizon. 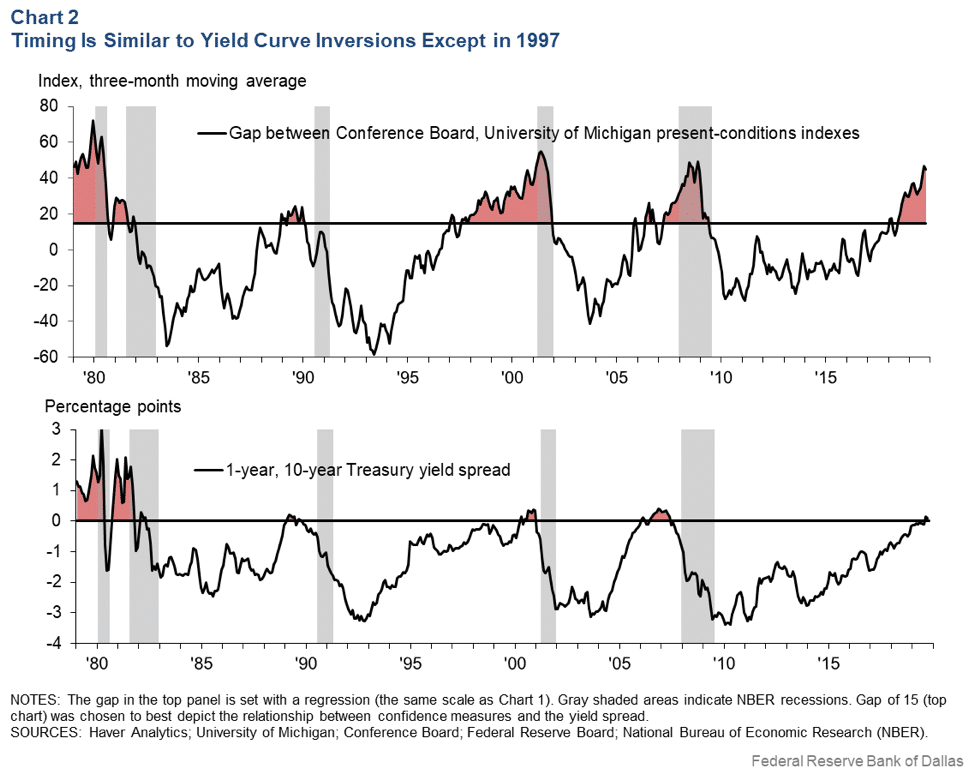 In the short-term (three months), Currently, we are in the strongest three-month period of the year (November through January). Seasonal strength, coupled with the Fed’s three interest rate cuts and optimism that the trade war is ending should drive stocks higher into January.  From there, an acceleration in the fundamentals will be necessary to fuel further gains. While we are optimistic over the next few months,  we believe that the stock market has a poor short-term risk-reward – stocks are very overbought, and investor optimism is at a rare extreme. We will patiently wait for market weakness before increasing our market exposure.

In the long-term (more than four years), ​we continue to believe that the stock market offers a poor long-term risk-reward. Stocks are expensive, 2020 earnings expectations appear unrealistic, and the strong dollar and tight labor market will pressure corporate profit margins, which will lead to disappointing profit growth. While investors believe that the Fed successfully managed an economic soft landing, we are concerned that since interest rates are already low, the Fed’s brief easing cycle will have a muted impact on economic growth.