Despite inflationary concerns and uncertainty over the rapid spread of the Delta variant, the S&P 500 rallied to another all-time high in July, is it time to take profits?

While the S&P 500 closed at a record high, the 10-year U.S. Treasury yield fell to a six-month low, the small-cap Russell 2000 had its first monthly decline since September, and the safe havens (gold and the U.S. long bond) outperformed. Historically, similar financial market divergences typically presage market corrections, which wouldn't be a surprise since the S&P 500 has gone nine months without a normal 5% correction.

Investors again reacted to the flattening yield curve by aggressively rotating from the economically sensitive value sectors of the market to the interest-sensitive growth sectors. In July, the interest-sensitive Russell 1000 Growth index jumped by 3.4%, while the Russell 1000 Value index increased by 0.85% -- i.e., growth outperformed value by 2.6% in July. Year-to-date through, the value sector has outperformed the growth sector by only 1.4%, despite the robust economic data and strong corporate earnings.

According to Factset, the S&P 500 booked a revenue and earnings increase of 24.9%, and 89.3%, respectively, which is its best growth since Q4 2009. Also, 87% of S&P 500 companies have reported a positive Q2 20121 revenue and earnings surprise, which is the highest percentage since Factset began tracking this metric in 2008. Unfortunately, by most valuation measurements, the stock market has never been more expensive. The forward 12-month P/E ratio for the S&P 500 is 21.1, which is 30% above the 10-year average of 16.2. Despite the strong fundamentals, we believe that stocks are extremely overvalued and offer a poor long-term risk-reward.

In July, the core PCE inflation indicator surged to the highest level since July 1991, Q2 GDP grew at 6.5%, and 943k jobs were created. Also, second-quarter S&P 500 revenue grew at 24.9%, and earnings surged by 89.3%.  Despite the strong economy and surging inflation, the Fed continues to print $120 billion each month to buy financial assets.

Over the past seventeen months, the Fed has increased the quantity of money to an unprecedented level. We believe that this unprecedented increase in the money supply is responsible for the inflationary surge and booming asset prices (stocks, housing, and commodities). Also, we are concerned that their massive bond-buying program is driving interest rates artificially lower and distorting the bond market's economic signals, which leads to a misallocation of capital

Despite these significant uncertainties -- i.e., the economic impact of the Delta variant's spread, the highest core PCE inflation rate since July of 1991, the risk the Fed makes a costly monetary mistake – investors drove the S&P 500 to a record high. We believe the market is priced for perfection and vulnerable to a decline if any of these uncertainties manifest.

Chart 1: In July, core PCE (the Fed's favorite inflation measure) surged to the highest level since July 1991. While the Fed believes this increase is "transitory," booming equity, housing, and commodity markets may indicate that the Fed-induced a financial bubble.

Also, while most investors are ebullient, we believe that financial market divergences are signaling that a market correction is imminent. While a few mega-cap technology stocks drive the S&P 500 higher, most stocks have been in a consolidation or correction for nearly six months. 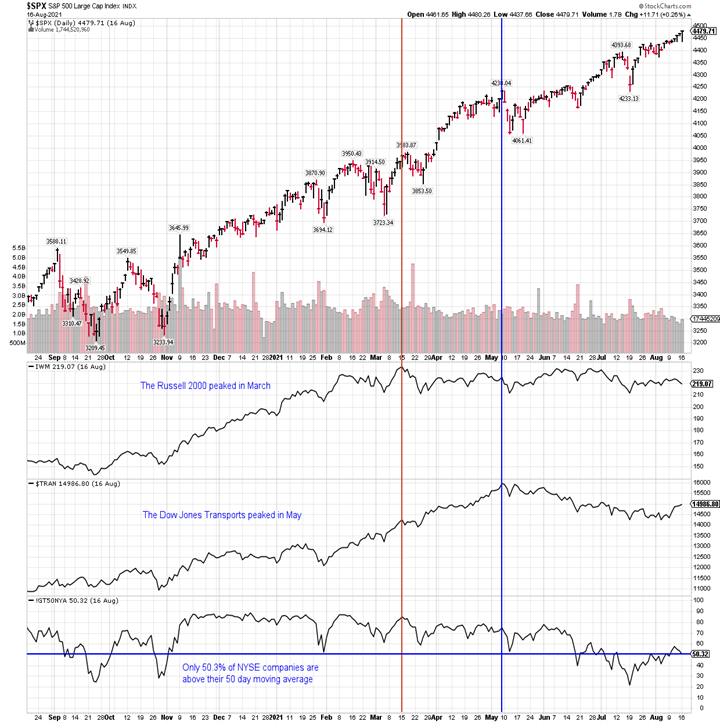 In July, uncertainty over the rapid spread of the Delta variant and its impact on the economy created a flight to safety. Investors sold the economically sensitive sectors of the market (energy and financials) and bought the defensive healthcare, REITs, utilities, and consumer staples sectors. Also, investors bought the mega-cap tech stocks (Facebook, Apple, Amazon, Google, and Microsoft), which benefit from declining interest rates. We expect the Delta variant to diminish and the economy to continue its strong growth this fall. In this reflationary economic environment, we expect interest rates will rise, and the value sectors of the market will outperform the overvalued and over-loved growth sector. 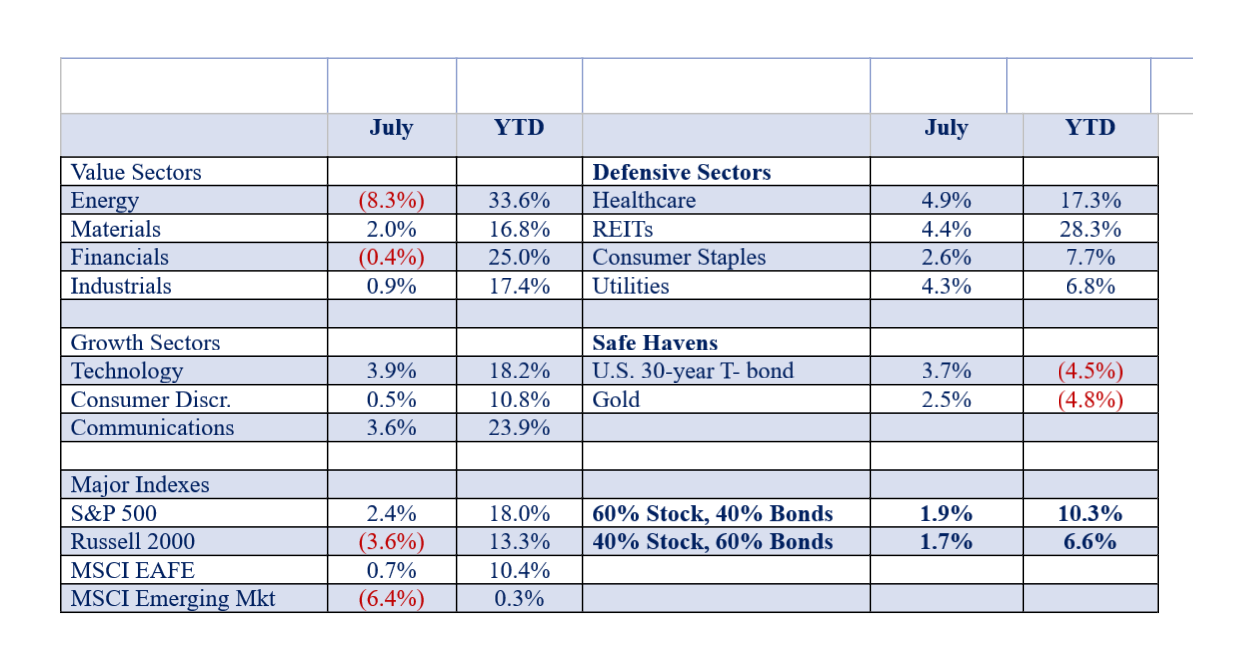 We remain positioned for a reflationary economic environment (accelerating growth and inflation). We are concerned that significant monetary and fiscal policy errors could lead to an inflation problem as the delta virus abates, the global economy accelerates, and interest rates rise.  Our core investments remain in the economically sensitive value sectors of the market (industrials, financials, and Energy), commodities, and TIP's (U.S. Treasury Inflation-Protected Securities). We remain underweight equities and fixed income duration and overweight commodities relative to our benchmark. We reduced our portfolio's risk level due to the value sector's underperformance and our short-term market concerns. Our portfolio's annualized volatility is 9.0%, which is slightly less than our 60/40 benchmark. 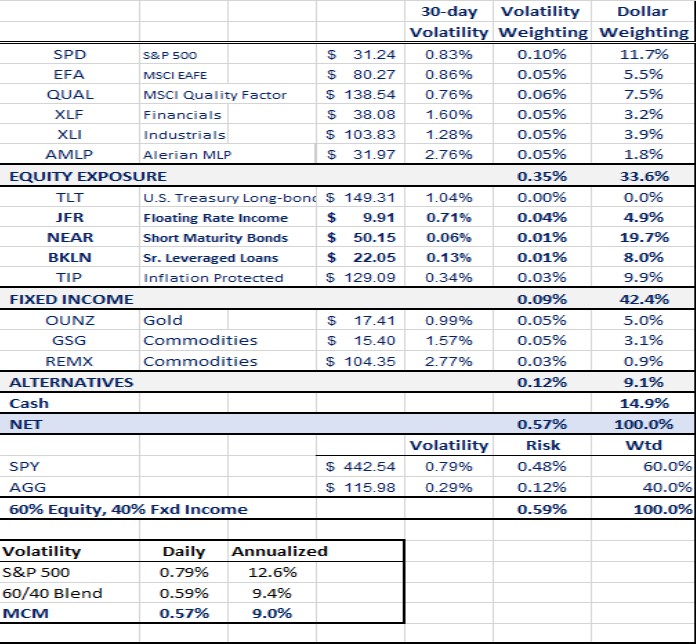 Our short-term (three-months) outlook is negative:

We believe that the market offers a poor short-term risk-reward because investors are complacent, and market breadth is deteriorating. While the S&P 500 reached a record high on August 16th, the small-cap Russell 2000 and the Dow Transportation Average peaked on March 15th and May 10th. Additionally, most NYSE companies are below their 50-day moving average and in a correction. Divergences and narrowing market breadth typically presage a market correction, which after the market's record run, would be healthy. When investors are fearful, the market is oversold, and breadth begins to improve, we will increase our tactical risk exposure. Our short-term market outlook is negative.

We believe that the S&P 500 offers a poor risk-reward because it is extremely overvalued. Also, we are concerned about the long-term unintended consequence of the unprecedented monetary and fiscal policy that was used to combat the pandemic.  Artificially low-interest rates and historic peacetime deficits have led to a record debt burden, which will become problematic as the economy grows, and interest rates normalize. We continue to see a significant opportunity to invest in the value sectors of the market while avoiding the mega-cap tech stocks and the S&P 500. While we expect to profit from the reflationary rotation into the cyclical stocks, longer-term, we remain concerned about the impact rising interest rates will have on stock valuations. Our Strategic Asset Allocation is underweight equities relative to our benchmark.