What is Driving the Stock Market

Stocks fell for the third week in a row, as investors worried about weak European economic data, plunging interest rates and fears of a global recession.  The S&P 500 fell by 1.03%, while the tech-heavy Nasdaq 100 and the small-cap Russell 2000 dropped by 0.55% and 1.28%, respectively.  International stocks also performed poorly, the MSCI EAFE Index (international ex-US and Canada) declined by 1.56%, and the MSCI Emerging Markets fell by 0.83%.  In this “risk-off” environment, the safe havens performed very well — gold rallied by 1.00%, and the U.S. Treasury long-bond (TLT) jumped by 4.34% this week.

This week, news headlines drove the stock market to extremes. On Monday, stocks and global interest rates fell because of weak global economic data, and violent protests in Hong Kong (Asia’s financial hub).  Investors received some relief on Tuesday when President Trump announced that he would delay the September 1st 10% tariff on some Chinese consumer goods until December 15th, so Christmas would not be negatively impacted.

Unfortunately, on Wednesday, the S&P 500 dropped by nearly 3% as investors panicked when weak economic data (a negative GDP report in Germany, and the weakest Chinese industrial production report in 17 years) led to a plunge in interest rates, which caused the yield on the 10-year U.S. Treasury bond to briefly fall below the 2-year U.S. Treasury’s yield. While other parts of the yield curve inverted months ago, this was the first time the 2’s-to-10’s inverted, which increased the probability of a recession over the next 12-to-18 months.

On Thursday and Friday, the oversold stock market and depressed interest rate rebounded after a German newspaper reported that the fiscally conservative German government might run a $50 billion budget deficit to spur economic growth if Germany fell into recession.

During this “risk-off” week, the 30-year U.S. Treasury bond fell to a record low of 1.92%, and incredibly, the 10-year German Bund dropped to -0.72%. To put these low yields in perspective, in the last recession, the 30-year U.S. Treasury bond and the 10-year German Bund bottomed at 2.50% and 2.92%, respectively (see chart below).  Also, nearly $16 trillion of global debt, or 25% of all outstanding debt, has a negative yield, which means that investors who hold to maturity are guaranteed to lose money. 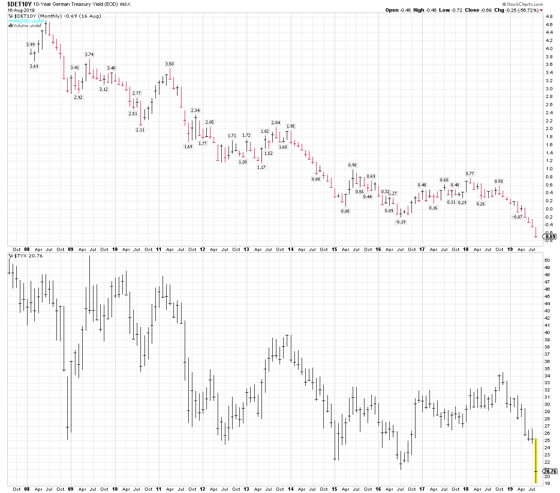 The most basic investing fundamental is that you must assume risk to receive a reward, and the more risk you take, the more potential reward you should receive. This tradeoff between risk and reward is also known as a risk premium.

Since the U.S. is the strongest developed economy in the world, we have low inflation, and we are the world’s reserve currency, investing in our U.S. sovereign debt should offer a low return relative to other developed nations, because we are a safer investment with a very low risk of default.

Currently, the 3-month U.S. Treasury bill yields 1.90%, which is somehow higher than all European sovereign debt maturities expect for the Italian 30-year bond:

Are You Prepared to Retire Well?Learn More About the MCM Retriement Checkup

Our long-term asset allocation remains underweight equities because the market is overvalued, the profit cycle is slowing, and earnings are poised to disappoint as global growth slows and profit margins compress.  In our view, the Fed tightened policy too much last year and the recent tariff increases will accelerate the slowdown in growth.  We remain concerned that the yield curve indicates that the Fed is too tight and a recession is probable within the next year kaufen viagra in deutschland.

As value investors, we will continue to underweight our long-term equity exposure until the markets offer a favorable risk-reward.